The history of ice cream

Research by Caius historian Dr Melissa Calaresu suggests that in Italy iced products were enjoyed by rich and poor alike as long as 300 years ago. Her research has been featured on the University of Cambridge Research News site.

Our appetite for ice cream is as fickle as the British weather: a hot spell sees sales peak while demand dips when the sun disappears. Street vendors of ice cream, kiosks and ice-cream vans are particularly vulnerable to a grey and gloomy summer. It’s not surprising that much of the earliest evidence of ice-cream making dates back to places where the weather is reliably hot. The Romans loved the cool taste of ice mixed with fruit; the Emperor Nero reputedly ordered snow to be brought down from the mountains to make into refreshing desserts. 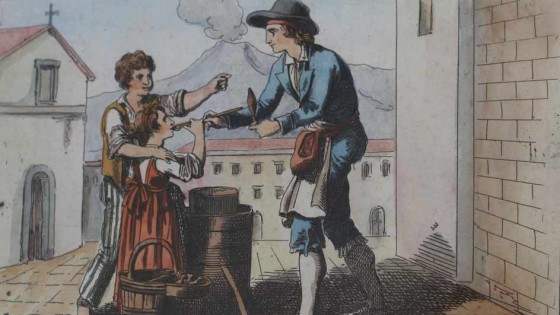 Today factory-made ice cream is manufactured by freezing technology and controlled by computers. The ice-cream mix is passed through a giant tube surrounded by pipes which contain chemicals such as ammonia that freeze. The mixture is pumped through the tube, where it gets cold very quickly. A blade turns inside the tube, whipping the mix to introduce air bubbles and scraping the sides of the tube to clear off ice crystals. The result is a deliciously smooth frozen dessert: ice cream.

Until the late 19th century, ice-cream making relied on large amounts of ice to freeze the mix as it was churned to keep it smooth. Throughout much of southern Europe, ice was harvested, often from glaciers in the mountains, and transported to towns and cities where it was used to cool buckets of mixes. Snow too was gathered and made into ice by being compressed in pits – in southern Italy known as neviere – where it was kept cold for months. Ice harvesting, and probably ice making too, was a mini-industry with teams of people busy both winter and summer.

"The passion for iced water is so great and so general in Naples, that none but mere beggars would drink it in its natural state."

Caius Fellow Dr Melissa Calaresu is a cultural historian of 18th-century Italy whose work focuses on the city of Naples in southern Italy. By the 16th century, Naples was one of the many cities linked into a network of suppliers transporting a cargo of coolness by land and sea to a populace keen to sample the new tastes hitherto associated with the tables of the rich and powerful. If iced desserts were served at the court of Louis XIV then it wasn’t long before iced desserts were being made elsewhere.

Dr Calaresu is particularly interested in the history of sociability, life on the streets and in public meeting places. Her research has led her to study the gathering places of Naples, which at the end of the 18th century was the third largest city in Europe. “Coffee houses were places where people met and socialised, read the newspapers and exchanged titbits of gossip. But they also met in ice-cream houses – called sorbetterie in Italy.” All these places played an important role in the spread of the Enlightenment, a movement that ushered in a belief in human progress.

Historians of culinary culture face a particular challenge: food is an ephemeral product. There are few foodstuffs more fleeting than ice creams, granite and sorbets which melt in a matter of minutes. Ice cream has long been portrayed as a luxury product that would, in its early days, have been enjoyed primarily by an elite set of society. Its association with affluence stems chiefly from the fact that recipes for ice cream are found in cookery books and other written materials; textual records were the preserve of people who were literate and likely to be well-off. Similarly, surviving artefacts relating to the consumption of iced desserts tend to be those made by manufacturers such as Sèvres and Capodimonte, both royal porcelain factories, which produced fashionable items commanding high prices.

Research by Dr Calaresu into historical sources now suggests that ice cream and other frozen desserts were sold on the street and were enjoyed by a wider range of people than has been thought. The stifling heat of Neapolitan summer represented a lucrative market for cool refreshments that would have encompassed both rich and poor, both those living in the city and tourists. The English travel writer Henry Swinburne, who travelled to Naples in the 1780s, wrote: “The passion for iced water is so great and so general in Naples, that none but mere beggars would drink it in its natural state; and, I believe, a scarcity of bread would not be more severely felt than a failure of snow.”

Official records held in Naples show that the demand for ice was so great that it was considered an important commodity; along with other staples such as grain and oil, it was taxed and prices for it were recorded and regulated. The status of ice and snow as a source of revenue is also illustrated by the presence of chapels named after Santa Maria delle Neve (Virgin of the Snow) which were visited by sailors to say a quick prayer before they crossed the bay of Naples with boats laden with ice.

Naples was a stopping point on the Grand Tour of the 18th century – a rite of passage undertaken by middle and upper class young men from Northern Europe who soaked up not just the splendours of the classical world but also remarkable natural sights such as Vesuvius, the volcano that destroyed the cities of Pompeii and Herculaneum. These well-heeled visitors purchased souvenirs (such as prints) of their cultural pilgrimages as proof of their status as educated and well-travelled young gentlemen prepared to take their place in polite society. Accounts written at the time reveal that travellers were as interested in the customs of local people as they were in sites of historical and geographical interest.

Prints sold as souvenirs suggest that iced treats were enjoyed by the lazzaroni (Neopolitan lower classes) as well as by the aristocracy. An engraving by Pietro Fabris, owned by the British Library, shows a couple of barefoot boys reaching out to lick the spoon of an ice-cream seller who has stationed himself and his wooden pails in a square beside Naples’s Angevin castle. The image is part of a collection depicting the customs of the Neapolitans published in 1773 and dedicated to the British emissary to Naples, William Hamilton. An engraving of a similar scene, by Achille Vianelli, shows a sorbet vendor with a long apron selling his wares from a table set near the in Castel Nuovo. Two gentlemen in top hats and fitted jackets scoop their sorbets from small pots while a rascally-looking fellow with bare feet and a missing trouser leg tips his sorbet straight into his open mouth.

The dependence of the poor as well as rich on iced products was remarked on by many travellers. It even caused John Moore, an English doctor living in Naples in the 1780s, to see cold drinks as a serious threat to social order. He remarked disparagingly that: “The half naked lazzarone is often tempted to spend the small pittance destined for the maintenance of his family, on this bewitching beverage, as the most dissolute of the low people in London spend their wages on gin and brandy.”

Vendors of all kinds were – and still are – a colourful feature of street life in Naples. “Street sellers of ice cream and sorbet didn’t necessarily represent competition for the ice-cream shops – itinerant vendors may well have been supplied, and possibly retained, by the shops to go out onto the streets and extend their market,” says Dr Calaresu. “In terms of relationships between different strands of society, there’s a tendency to confine consumption of what we think of as luxury products too strongly to elite groups. Contemporary sources suggest that there was much greater intermingling and over-lapping of social milieus in cities such as Naples than historians have thought.”

Museums and private collectors have examples of ice cream containers made in silver and porcelain; the Fitzwilliam Museum in Cambridge has a fine example of a porcelain stand designed to hold ice cream cup. Made by Sèvres, it was originally part of a service given by Louis XV to Maria Theresa of Austria. Little is known about containers used on the street; Dr Calaresu suggests that vendors might have sold their wares in re-usable pewter bowls. From the mid-19th century, ice cream bought on the street was served in thick glass bowls known as penny licks. Concerns about hygiene led an American entrepreneur to invent an edible container and the concept of the cone was born.

Dr Melissa Calaresu is one of the Directors of Studies in History at Caius. More information about studying history at undergraduate level can be found here.

This work is licensed under a Creative Commons Licence. If you use this content on your site please link back to this page.