The Curious Case of the Chapel Windows

Eagle-eyed Caians and others will have noticed that the windows in the north and south Chapel walls closest to Dr Caius’ tomb are not precisely opposite each other.  The south window is about seventeen inches further west than that on the north side.  Normally there would have been strict north/south symmetry, as at King’s and other College chapels.  Michael Wood was puzzled by the asymmetry when he was surveying the Chapel for the article on Dr Caius’ grave (Part I).  It is known that the original medieval chapel was extended eastwards in 1637.  The windows were then only extended upwards, with gothic style tracery, but were not extended or relocated.  On the other hand, the chapel was extensively “beautified” in the 1720’s and it seems most likely that the mismatching of the windows occurred then.

No major changes were introduced into the chapel between the 1720’s until the Waterhouse work in 1870.  Michael therefore needed to obtain precise information on the location of the medieval windows in order to deduce any changes compared with the 1720 windows which we can see today.

Unfortunately, there are no archive documents to give the required information, nor are the early Cambridge town prints by Lyne (1574), Braun (1575) or even Hamond (1594) useful.  The first two only show schematic views of college buildings whilst Hamond shows considerable detail of Caius College, which unfortunately can be shown to be incorrect and is therefore deemed to be of little value in locating the chapel windows accurately.  Fortunately, we have the splendid print of the college by Loggan of 1688 whose timing falls between the chapel extension of 1637 and the beautification of 1720 (Figure 1).

Loggan is a first rate draughtsman and although the print is not an architectural drawing, it is likely that the proportions of the chapel details are close to correct.  One can therefore deduce the window breadths and location by taking the scale from a dimension in the same plane on the print and the actual measurement today.  (Restricting measurements to one plane avoids distortions introduced by perspective).  Michael was able to superimpose probable medieval window locations and dimensions on his outline plan of part of the present chapel (Figure 2).  Loggan suggests that the medieval windows were approximately 6ft 6in wide on the external walls and with a slight splay which with a right angle “return” on the inner walls gives a 6ft internal span.  Michael was fortunate at this stage of the investigation to obtain permission to remove some of the wooden panels on the internal chapel walls.  This was done with great skill by the College Carpenter, Michael Girdwoyn, so that each panel could be removed and rehung on brackets hidden behind the panels.

Figure 2 shows not only the chapel windows but also the positions of the Perse and Legge memorials and the Caius grave/initial tomb position, all completed before the 1637 chapel extension.  The walls behind the panels gave extra valuable information.  On the north wall a discontinuity showed the west side of the medieval window and allowing a six foot span, it may be seen that there is exactly the right length left to accommodate Dr Caius’ tomb which was originally placed above the grave and designed for the space then available.  (The east end of Dr Caius’ grave was at the internal face of the east wall of the medieval chapel as shown in the Part I article).  The north window may be “transposed” across the chapel east/west centreline to give a symmetrical position for the south window as shown in Figure 2.  It fits to give enough space for the Legge memorial which must have been raised to avoid the observable piscina in the south wall.  The Legge memorial otherwise balances Dr Caius’ tomb where it was originally located.  Removing another panel, showed a discontinuity in the south wall which marked the east side of the south window, thus confirming the position of both the medieval windows.  It was noted that Dr Perse’s tomb on the north wall is very close to the west side of the adjacent window and so would balance the closeness of Dr Caius’ tomb on the east side of the same window.

The reason for the asymmetry of the present windows is now clear.  In 1720 it was desired to expand the internal window spans to about 7ft 6 in.  The north window could only be extended to the east (after Dr Caius’ tomb had been moved) and the south window could only be extended to the west assuming that the Perse and Legge memorials were to be left in place.  Presumably this was the decision taken, and it resulted in the current window asymmetry.

The 1720’s window plan had interesting consequences for the external chapel elevations.  Figs 3 and 4 show photographs taken by our former President, Professor Yao Liang.  Fig 3, of the north side, shows how the enlarged 1720 window maintained the balanced design of the elevation.  The annotations show how the 21ft building “module” was retained, without infringing on the internal Perse memorial.  By contrast, Fig 4 shows the south side with the shortened eastern panel enforced by the angle between the nominal east/west of the chapel and the north/south line of the east front of Caius Court.  The window broadening may be seen to be constrained by the Legge memorial.  The resulting design has been “balanced” by the ingenious insertion of a false pilaster to the right of the panel and with consequent alterations to the balustrade above.

Michael considers that the “curious case” has been resolved by his investigation, which has also revealed additional insight into the design of the external south façade of the chapel. 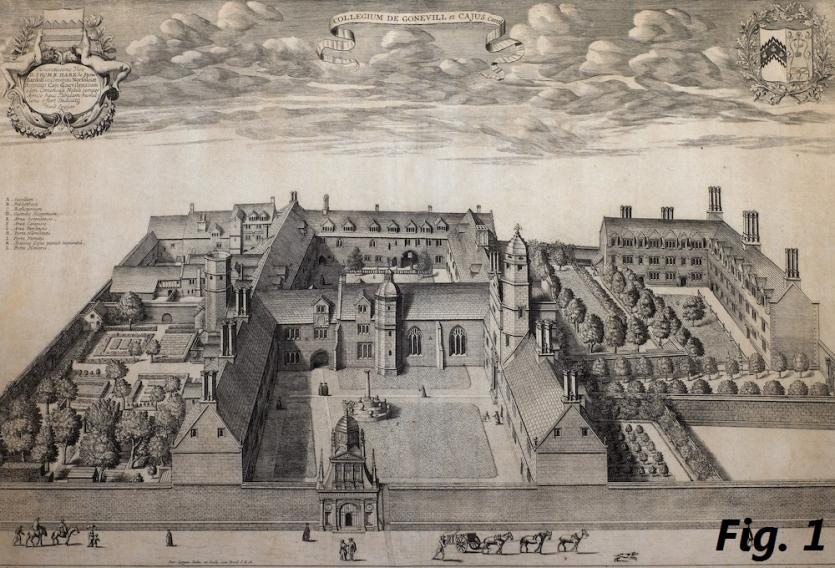 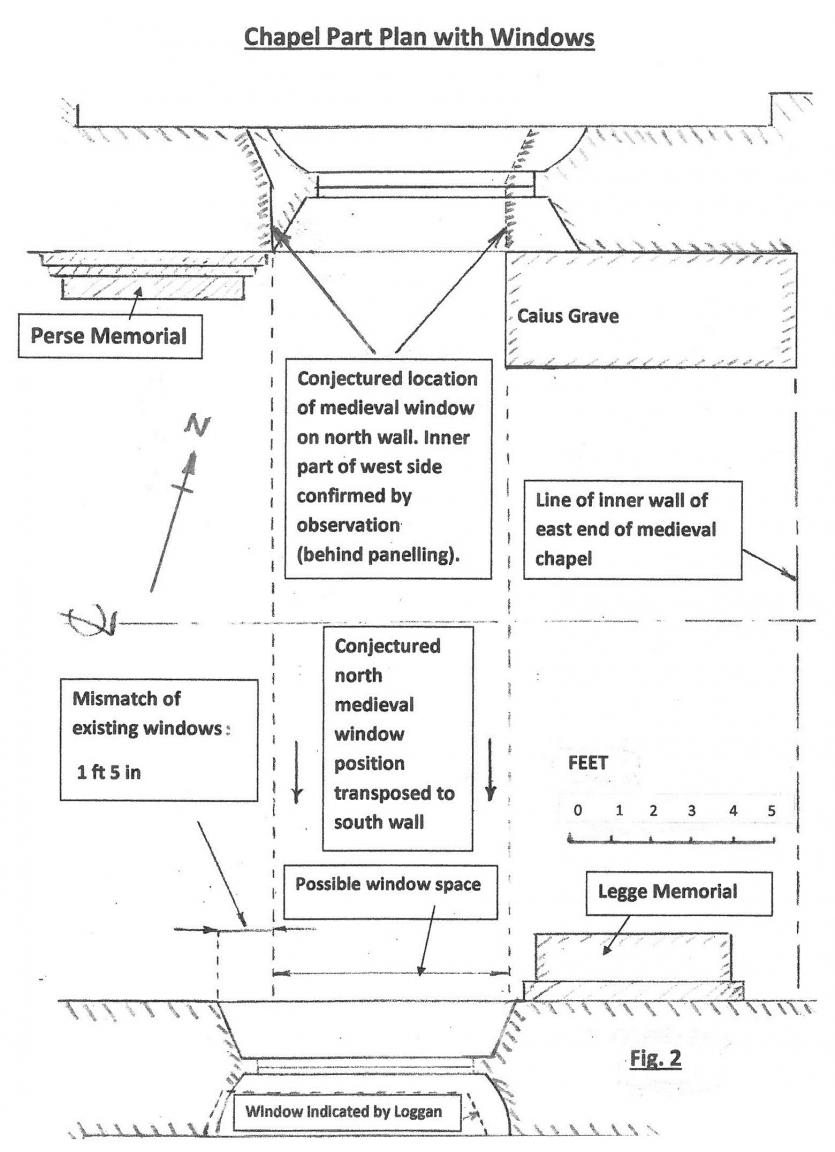 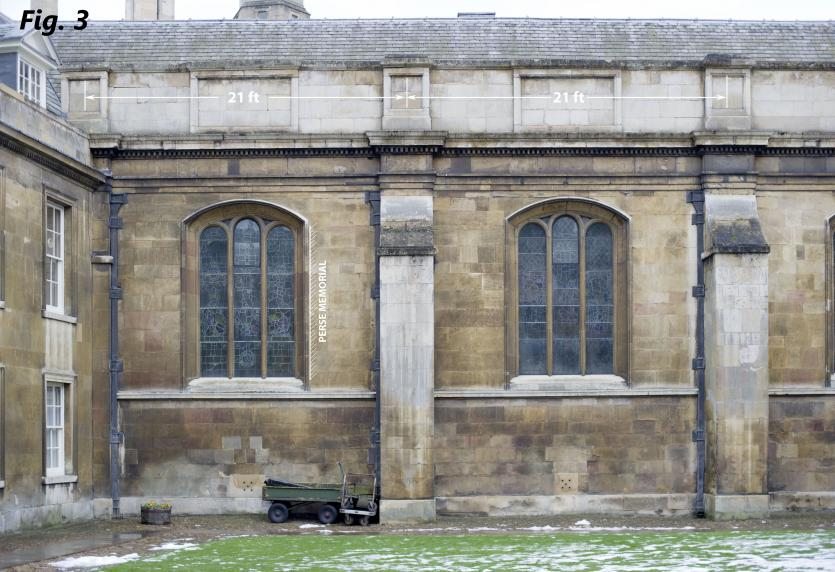 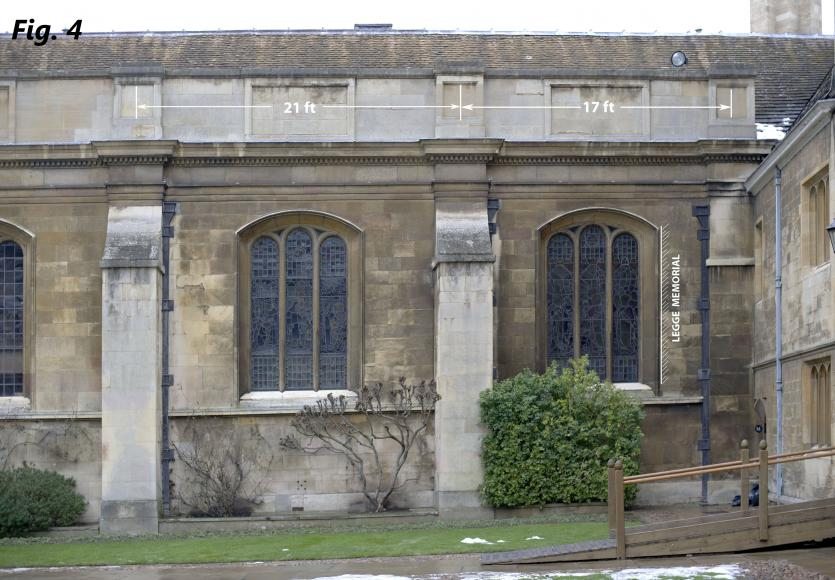