Andreas Vesalius was born in Brussels in 1514, the son of an apothecary. He attended the universities of Paris and Louvain before specialising in medicine and moving to the university at Padua, which awarded him the degree of doctor of medicine and invited him to a teaching post in surgery and anatomy shortly afterwards. One of Vesalius’s more noteworthy students was John Caius, who arrived in 1539; for a short while the two shared some lodgings in the city. Caius was the older man and already a Fellow of Gonville Hall but did not gain his doctorate in medicine until 1541.

The precocious Vesalius caused something of a sensation. In 1538 he produced a dissection manual for his students. During his lectures he performed the anatomical dismembering of a human corpse himself, rather than delegating the operation to a surgeon, as was customary. Vesalius argued that the study of anatomy was root to all branches of medical study and that dissections of a human cadaver by the student were essential. In 1539 he secured a supply of bodies of executed criminals from a Paduan prison; this would bring him into conflict with the Catholic Church. From his dissections, by 1540, Vesalius concluded that Galen, whose work had dominated Western medical understanding for a thousand years, had based his human anatomical conclusions on the vivisection of apes. Around this time he started work on his opus magnus (great work), De humani corporis fabrica (The fabric of the human body), now regarded as the decisive origin of modern anatomical knowledge and a repudiation of certain facets of the Galenic tradition.

The first edition appeared in 1543 and was issued entirely at its young author’s expense. Vesalius selected Oporinus as the printer and supervised himself the production of the woodblock illustrations. Shortly afterwards Vesalius entered the employment of the Holy Roman Emperor Charles V, both as his personal physician and surgeon to the army. Imperial service provided Vesalius with the leisure time to rewrite comprehensively the Fabrica, retaining Oporinus as printer; our copy is an example of this revised edition. It was an improved one in several ways: in the ethnic aspects of craniology and the physiological observations we see in the final chapter.

Our copy is inscribed ‘ex dono Thomae Grymston Medicina Dris quondam Socii huius Collegii’ (A gift from Thomas Grymston, once a member of the College of Medicine). Grymston (or Grymstone) was Fellow and later Bursar of the College. As well as acting as physician in the town, he is recorded in the Annals as having, in 1601, conducted a public dissection of a human cadaver, and in this way he was doing no more than fulfilling the instruction of Doctor Caius that ‘every year, during the winter, there shall be spent by the students of our College, on anatomy and on the worthy burial of dissected bodies at St Michael’s, 26s 8d’. In this way, Caius was invoking the tradition of his old friend from Padua and we see, on the title-page of the Fabrica, the earnest figure of Vesalius, tools of his trade at the ready, performing this ritual in a crowded lecture theatre, whilst Death stands watch gloomily over the body. 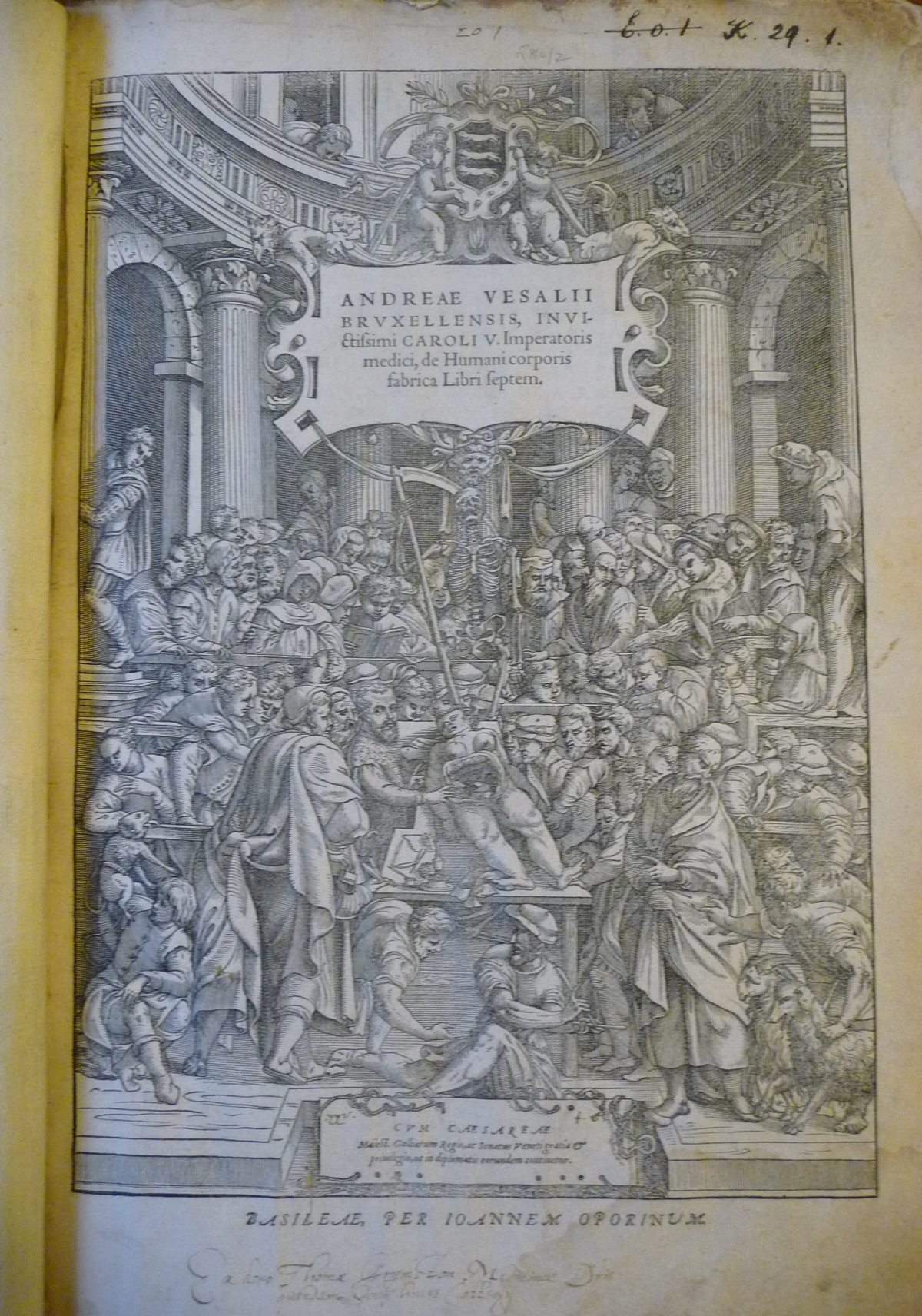 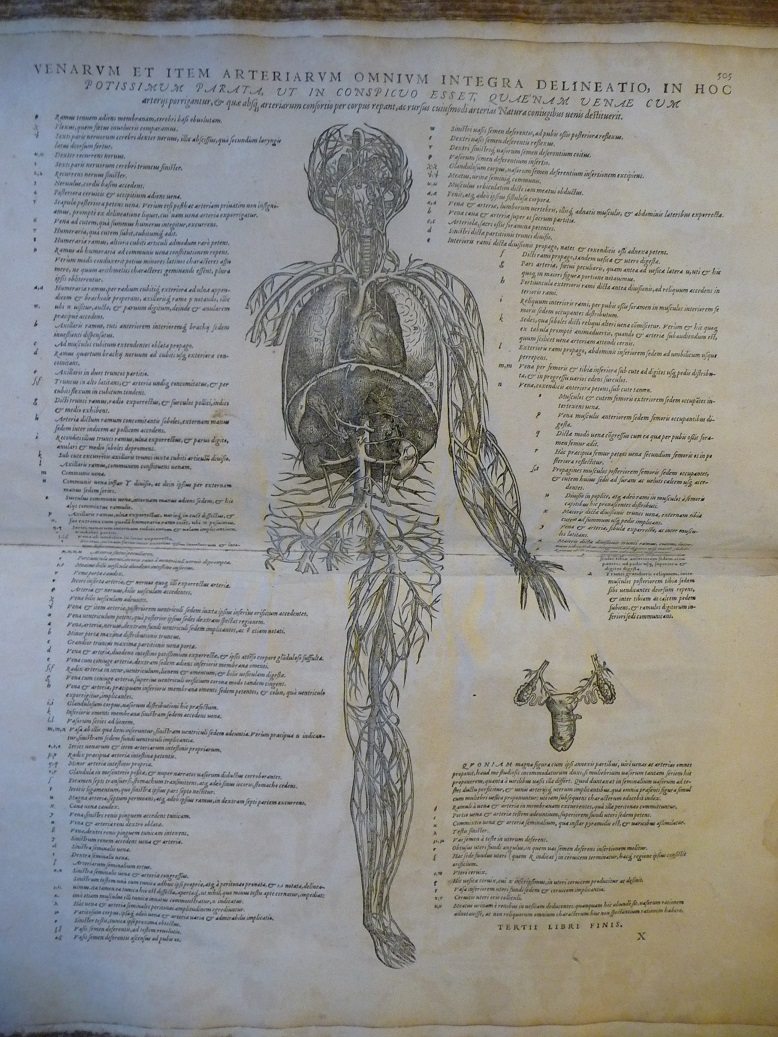 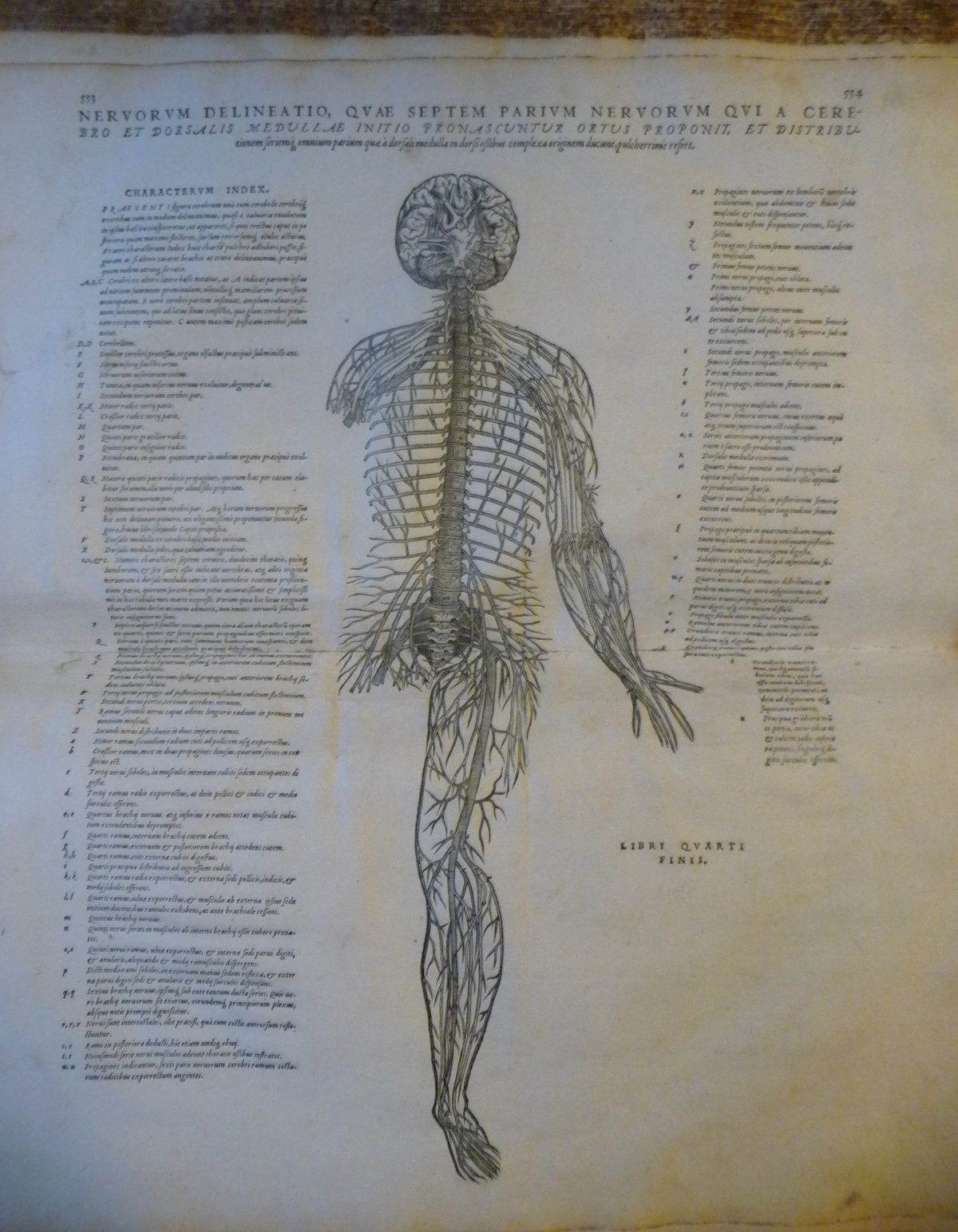 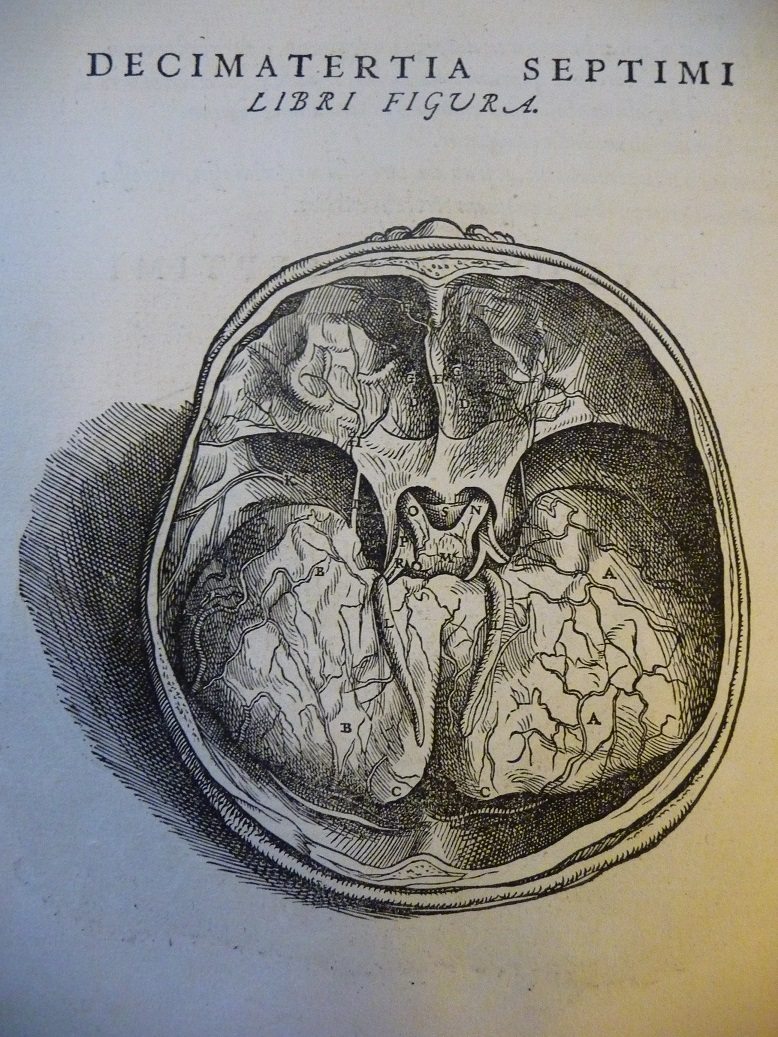 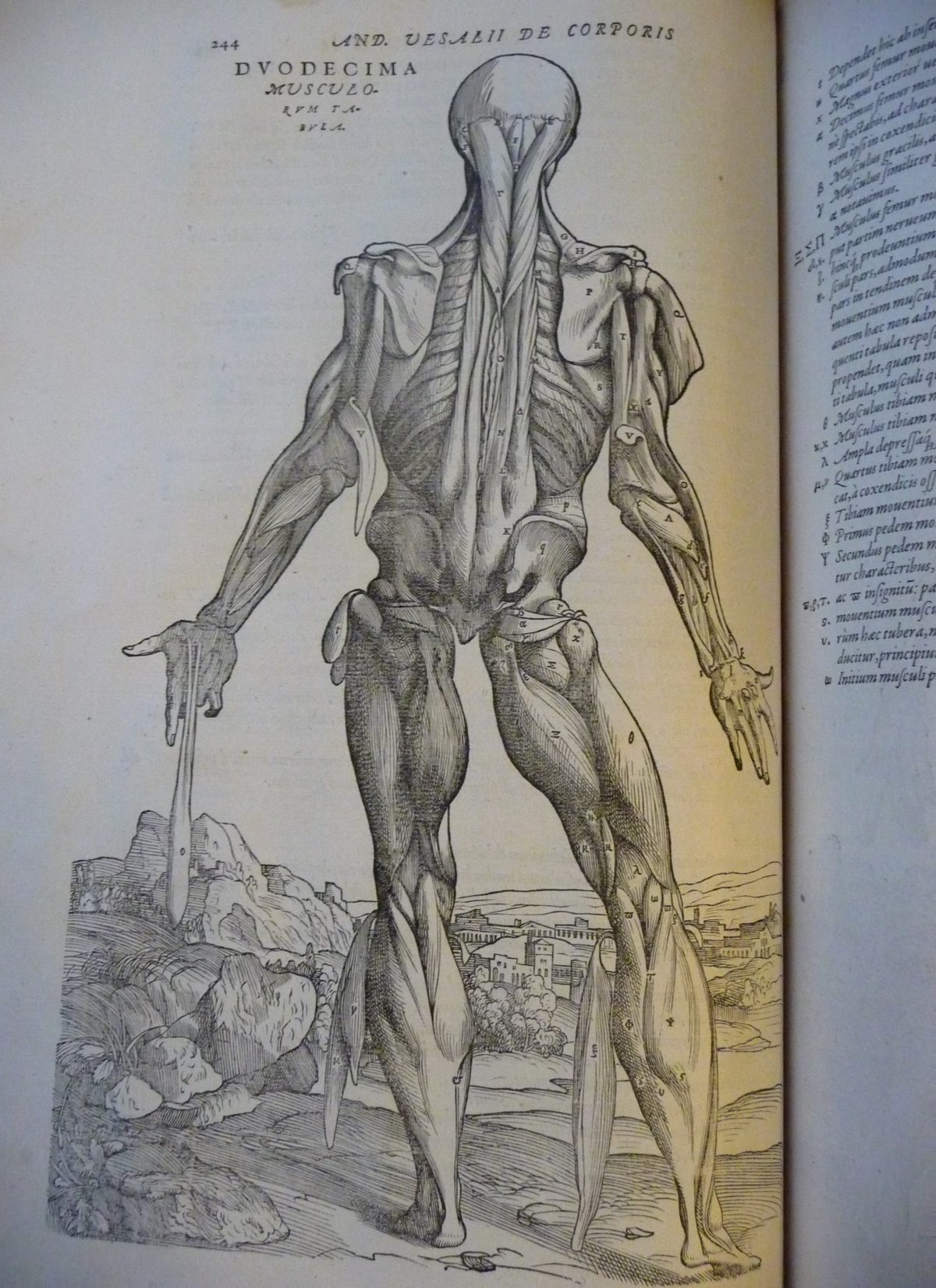 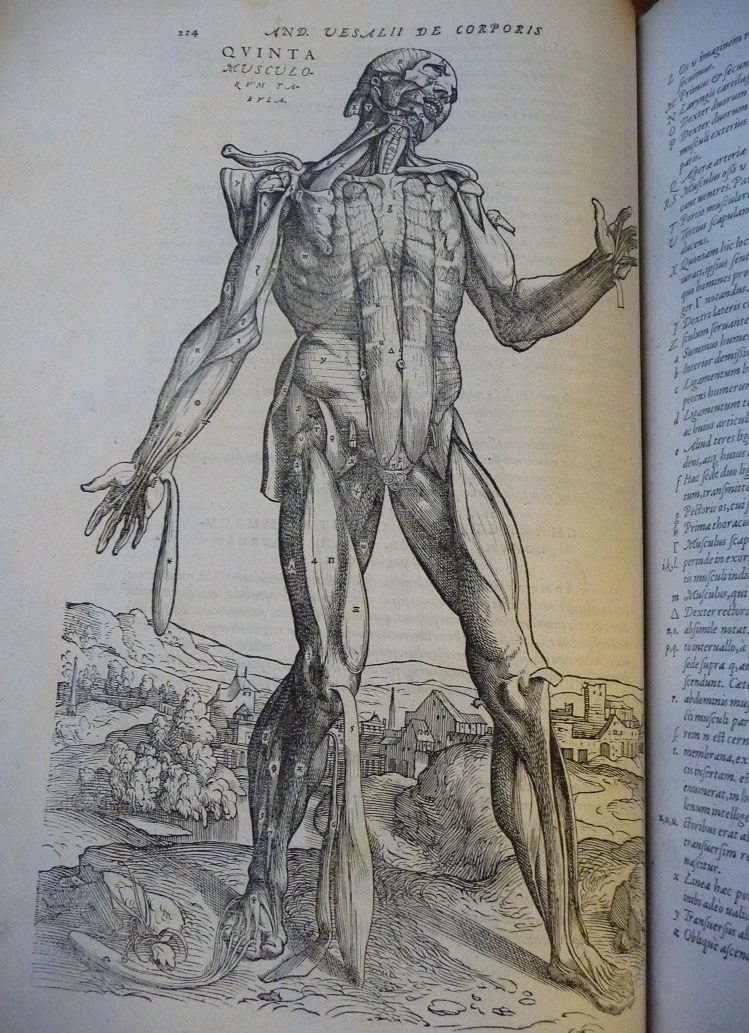 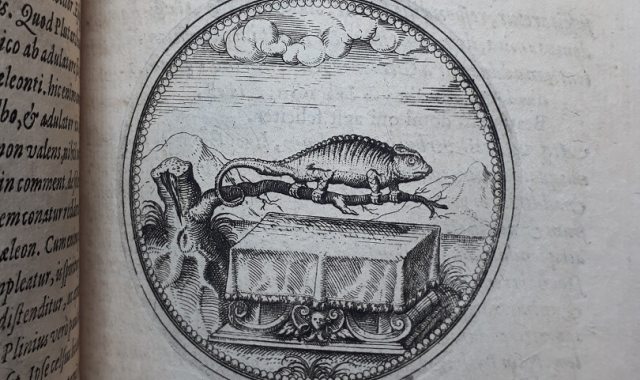 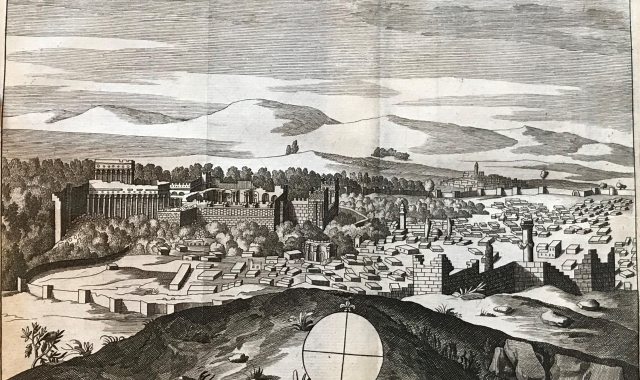