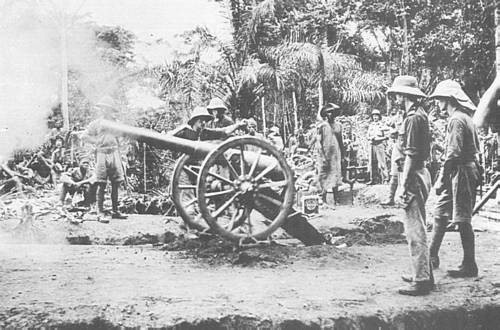 The 1951 film, The African Queen, did much to remind people that there was fighting during WW1 in equatorial Africa. The West African Regiment was a single battalion regiment that had been raised in 1898 in order to defend the critically important naval base at Freetown, Sierra Leone. The regiment consisted of about 1200 native soldiers with 60 seconded British officers. It had been recognised that the Europeans who went there were very prone to diseases to which the local population were relatively immune.

Early in the war, the allies attacked the German holdings and pushed them back into the more mountainous regions on the Nigerian border. British actions here suffered heavy casualties due to the efficiency of the German machine gunners before the remaining Germans surrendered in 1916.

Edward Fleming Fielding was one of those casualties who died at Fort Dachang on the 24th October 1915 and is buried in Freetown. Born in Buenos Aires, he read Law at Caius (1898) and was a member of the Boat Club. He was a Lieutenant in the 9th Battalion the Prince Albert's (Somerset Light Infantry) before being attached to the West Africa Regiment.

Professor Fernando Quevedo, Mathematics Fellow at Caius and Professor of Theoretical Physics at the Department of Applied Mathematics...

First-year students at Caius did diversity training a little differently this year, with the help of five newly-commissioned radio plays...