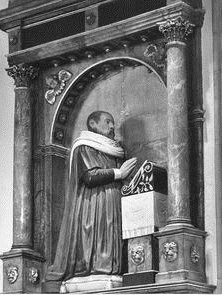 Colleges like to celebrate the memory of their major benefactors, and Caius has had few more worth celebrating than those of Stephen Perse. In his history of the College Christopher Brooke quite rightly praised Perse’s  wonderful generosity: but to be wonderfully generous, Perse first had to be wonderfully rich.  And, as we heard in the bitter and threatening diatribe by the prophet Amos which the Church of England prescribes for the first reading tonight, Amos had a very low opinion of the rich. Wealth, for him , was almost always ill-gotten. In his preaching the rich are always those who have “sold the righteous for silver, and the poor for a pair of shoes”, and he hadn’t a good word to say about the wealthy men and women of his age: “woe to them that are at ease in Zion”.

Amos’ book is a collection of ferocious oracles uttered in the late eighth century BC against a variety of targets. But the common strand running through them all is a sustained polemic against those he denounces as “fat cows of Bashan”, obscene in their conspicuous consumption, financially, sexually and religiously corrupt, who “oppress the poor, and crush the needy”,(4:1) who feast at the great religious festivals cushioned on piles of cloaks,  pawn-shop pledges taken from the poor in return for bread.

“that lie upon beds of Ivory, and stretch themselves upon their couches,
and eat the lambs of the flock, and the calves out of the midst of the stall”,  (6:4)

like something, you might think,  glimpsed on party night at  Trump Tower: had they had the technology, the lifts would have been made of gold.  For Amos all this was not only a betrayal of Israel’s earliest origins,  as a refugee people who owed everything to the generosity of their God. It was a kind of cannibalism, because these extravagant riches were parasitic on the blood toil sweat and tears of the poor. So the fact that  Israel is constituted by her covenant with  the one true God  counted in  Amos’s eyes for nothing. God is the God of righteousness, of justice, and the rich of Israel have denied  God’s  justice to the poor. So, through him God declares

“I hate, I despise your feast days…
Though ye offer me burnt offerings , I will not accept them.
Take thou away from me the noise of thy songs
For I will not hear the melody of thy viols.
But let judgement run down as waters
And righteousness as a mighty stream.” (5: 21-4)

And so, in another of Amos’s oracles, God even sets aside that covenant altogether, and along with it Israel’s claim to be his chosen people. He reminds them that he, the God of their history, is also Lord of the history of their pagan enemies:

“Are ye not as children of the Ethiopians  unto me, O children of Israel? Saith the Lord.
Have I not brought up Israel out of the land of Egypt?
And the Philistines from Caphtor?
And the Syrians from Kir?” (9:7)

Israel’s maltreatment of the poor has reduced them to the level of the idolatrous nations around them.

Our reading from Ephesians, by contrast, reminds a community of recent converts  from paganism that they must now live now  by a new set of values,  which separates them off from the morals and mindset of the pagan world on which they have turned their backs: “henceforth walk not as other Gentiles walk, in the vanity of their mind”.  And this new baptismal identity involves the  mutual dependence of members a community of holiness  and truth, justice and mercy, in which every virtue is rooted in the shared experience of forgiveness: “be ye kind to one another, tenderhearted, forgiving one another, even as God for Christ’s sake hath forgiven you.” Even the new work ethic they must all practice is not for its own sake: they are to labour with their hands “that they may have to give to him that needeth”.

Stephen Perse would certainly have endorsed that sentiment, but you may by now be wondering what all this has to do with the Perse benefactions. And of course  it would be very unfair, as well as shocking bad manners,  to apply Amos’ denunciations to poor Stephen Perse,  here in his College, urrounded by teachers from his school,  on what I suppose you could call his feast day. But as a matter of fact, Perse’s wealth was very extraordinary for a don in Jacobean Cambridge,  and quite how he accumulated so much money remains a bit of a mystery. He was a successful but not particularly famous physician. He served as College Bursar, and in those days Bursars were both allowed and expected to make personal profit on the business they transacted for the College.

However he managed it, Perse was seriously rich.  He owned farms in Essex, fields in a cluster of villages round Cambridge, and a string of houses, shops, and pubs stretching right across town, from Petty Cury to the Round Church. His property holdings included the enormous site of the old Augustinian Friary, between the New Museum Site and the Corn Exchange, which some of you may have visited a few weeks ago to view the archaeological dig there, and on just a part of which his school and almshouses were first built. Probably the key to all this wealth lay in the fact that his main business was as a money-lender, whose clients ranged from a sizeable proportion of the minor gentry of Cambridgeshire and the counties around, down to small Essex farmers, a couple of whom instigated cases in chancery against him for charging excessive interest.

There is no such thing as clean money, and those chancery cases suggest that Perse was probably a man who could drive a hard bargain. But unlike Amos’s fat cows of Bashan, he was not indifferent to the plight of the poor, and he wanted to do something to ease it. Providing a free grammar school for a hundred town boys, Perse instructed his executors that in choosing pupils  “a poor man’s child be preferred before a rich”. Alongside his school he provided six one-room dwellings  for the aged poor of the town-centre parishes, and he left an endowment to provide struggling young Cambridge tradesmen with start-up business loans.

These were of course, typical examples of urban philanthropy seventeenth century style, and his will had many others –   he left £100 towards the completion of the new town water supply we know as  Hobson’s conduit , and he paid for the paving of the notoriously marshy and muddy  road between Jesus Lane and the Barnwell bridge towards the Newmarket Road.  All this was the largesse of a man at ease in Zion,  comfortable in his surroundings, a good citizen proud of his college and his city,  conscious of his standing within both,   concerned to improve their amenities and ease the hardships of their more vulnerable members, but also, as the tomb behind me shows, with its careful and frankly rather vulgar specification of the precise amount of his legacy, a man determined to receive due credit for his generosity.

And equally, it was the largesse of a man who took for granted the standards and class assumptions of his age. Perse’s bedemen were provided with a roof over their heads and a small annual pension, and these were great benefits. But they held both the shelter and the shillings at the good will of Perse’s executors, and if the executors  decided  any almsman was “disorderly and not fit to continue”, then they were to be summarily evicted,  and their pension stopped. It wouldn’t have occurred to Perse, nor to most philanthropists in his century, that the poor had rights as well as needs. It wasn’t till the early Victorian period that the public imagination addressed itself to the necessity of reforming the administration of charitable institutions to safeguard the rights and dignity of the poor, a process reflected in novels like Dickens’ Oliver Twist and Trollope’s The Warden: by which time,  as many of you will know,   Perse’s own benefactions were urgently in need of reform, because the income from his legacies had grown vastly, but the increase had not been passed on to the intended beneficiaries.

Of course it was ever thus: free schools become fee schools, the rich get rich, and the poor get poorer, and never more so than in our own times. A recent survey in the Guardian claimed that just 62 multi- billionaires now collectively own more than half the rest of the population of the planet put together,  while just last week the Cambridge News reported that the gap between high and low earners here in Cambridge was wider than that in most other cities in England, and was getting wider.

And on the global stage,  we are witnessing a frightened, angry and self-protective clenching against the desperate needs of the new poor, the displaced and stateless victims of war, terrorism and famine.  Amos’ vision of a people who have turned their backs on truth, mercy and justice seems to be realized everywhere around us in our post-truth xenophobic world, wh ere the politics of the clenched fist triumphs, and in which elected leaders can shamelessly praise the effectiveness of torture, impose indiscriminate bans on refugees,  and  talk blithely of alternative facts.

It is easy to see that things are badly awry in our public life, less easy to see what a Christian response ought to be. In Perse’s day things seemed much clearer: poverty , ignorance and injustice were local and immediate manifestations of evils endemic to the human condition ,  even in an entirely Christian society, but which could  be ameliorated by founding grammar schools and almshouses. IN Paul’s Ephesus the pagan empire and the pagan city, given over to greediness and all uncleanness,  had to be left to their own devices.  But at least within the community of Christians,  the mutual interdependence of the forgiven, an alternative ethic of mercy and kindness and tenderheartedness could be lived. Some modern Christian thinkers, like the philosopher Alistair McIntyre,  believe that in a time of moral disorder and the collapse of shared beliefs about what constitutes human good, the preservation of humane values within the beleaguered enclaves of the church is probably the best we can hope to achieve. Certainly it’s hard to see how the values set out in Ephesians could realistically be embodied in political structures in our own plural and divided world, though I think the foundation of the welfare state was an attempt to do something of the sort.

And what can we make of Amos’s vision of a world, radically unrighteous like ours , but also radically under judgement, doomed to inevitable destruction  as a direct consequence of its own corruption: “for three transgression of Judah, and for four, I will not turn away the punishment thereof, because they have despised the law of the Lord.” It would , I suppose, be reassuring to live in a world where collective sin brought collective punishment: but that doesn’t seem to be how it works. In our world, xenophobia, lies  and aggression win elections. The bible offers no easy answers to the moral and social dilemmas of our times: but at least the angry witness of the prophet can keep alive in us a tireless  indignation at the oppression of the poor , and spur us, like Perse, to try to realise in the city, the nation and the world around us , some small measure of the kindness and tenderheartedness which is the demand of Amos’s God, and of ours.