Reem Satti has been announced as this year’s Wildy Student and will start a three-year PhD focusing on the molecular mechanism behind tumour and viral antigen presentation, under the supervision of Dr Louise Boyle in the Department of Pathology this October. 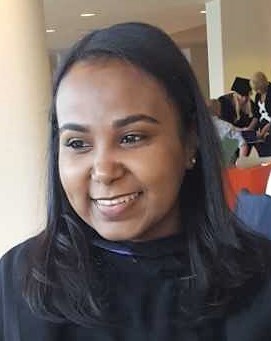 Reem Satti comes to Caius after completing a Bachelor Degree in Applied Medical Science from University College London (UCL) where she was awarded the highest achieving marks for two consecutive years. Her honours dissertation, which touched upon the up and coming field of complex systems, and involved the computational quantification of memory in cardiac rhythm from patients with liver cirrhosis, is what sparked her passion for immunology.

Delighted about the studentship, Reem Satti said ‘I am truly grateful to be a recipient of the generous Wildy Studentship. Engaged by Professor Wildy’s outstanding contributions in pathology, I look to do good (and my best!) by his name.’

The studentship, which is awarded on academic merit to one incoming pathology student, is named in memory of Professor Peter Wildy (1920 – 1987), a former Fellow of Caius and Professor of Pathology. Wildy made his name during his first short stay in Cambridge during which, together with Sydney Brenner and Bob Horne, he pioneered the application of negative staining electron microscopy to determine the molecular structure of viruses. The interest created by this work led Wildy into virus classification, and his paper 'What's in a virus name?' (Nature, 29 Jan 1966, 450–54), with Adrian Gibbs, Bryan Harrison, and Douglas Watson, set out a logical scheme for classifying viruses.

Following a five year stint at the Medical Research Council’s new Experimental Virology Unit in Glasgow and a decade as head of the new department of Virology in Birmingham, Wildy returned to Cambridge in 1975 to take up the chair of pathology at Cambridge.

The studentship celebrates the achievements of Professor Wildy and supports a Caius student studying for a PhD in the University Department of Pathology. The Elmore Fund on behalf of Gonville & Caius College together with the Pathology Department fully funds the studentship, including support for home fees.

‘We welcome Reem to Caius and congratulate her on the award of the Wildy Studentship. This prestigious studentship commemorates Peter Wildy, whom I remember well as Head of Pathology and Fellow of Caius.  As with all our PhD students, Reem will have the opportunity of living in our central Harvey Road Graduate Campus for up to three years and we wish her well with her research.’ said Senior Bursar Dr David Secher.