Experiencing Caius inspired Hannah Obie (Law 2019) to apply to the University of Cambridge and Gonville & Caius College – and now she is helping others follow her path.

Hannah is a first-generation university student from Grays, Essex. She attended William Edwards School in Thurrock for secondary school and The Coopers' Company and Coborn School in Upminster for her A-Levels.

Cambridge, or Oxford, were always the aspiration, and attending the 2018 Cambridge Sixth Form Law Conference saw her focus her mind and her targets on Cambridge, Caius and studying law.

“I decided to study law on that conference, because I liked the content, and I decided to come to Caius because of my experience living in Cambridge and at Caius,” says Hannah, who stayed at Caius’ first-year undergraduate accommodation at Harvey Court, West Road for the residential conference.

“I did History, English and RE at A-Level and I was ready to finish those, but I wasn’t sure what subject to take. Doing that conference showed me that if I took law I wouldn’t get bored, because there’s lots of different subjects and topics I could look into.

“There were so many lectures and there was something interesting in all of them. My favourite lecture was the contract lecture, by Dr Janet O’Sullivan, but I liked the variety.”

The College hopes to return to residential events next summer, hosting state-educated students from Norfolk as part of its Cambridge Higher Aspirations Scheme, and a Sutton Trust residential.

Hannah has been on the Cambridge Sixth Form Law Conference committee since matriculating at Caius in October 2019, and is current President of the society. The last two conferences have been held online due to the Covid-19 pandemic, with Hannah contributing a behind-the-scenes day-in-the-life video which can be seen below. She hopes for a hybrid solution to the conference in March 2022, allowing aspiring students to attend online or in person, restrictions permitting.

She is an access ambassador for Caius, often seen showing aspiring students around at Open Days or on school visits, or discussing her own experience in virtual events. Her involvement is about passing on her experience to the benefit of others. She is particularly grateful that she took part in the Target Oxbridge scheme, which involved residentials, mentors and support with personal statements and interviews, and events.

“I truly believe I wouldn’t be at Cambridge if it wasn’t for the work I did with Target Oxbridge,” she says.

“I’ve learnt so much from sixth form until now that I can hopefully impart on to other students so they can produce the most successful applications that they can.”

Hannah is entering her final year and, after a summer vacation scheme has a training contract with Reed Smith, who specialise in media and entertainment, and employment law.

Despite the pandemic and the associated restrictions, Hannah’s expectations have been met at Cambridge and Caius.

She adds: “I thought Cambridge would be this magical place, and in many ways it has been. I’ve loved living independently and meeting new people – you meet so many new people from around the world and hear so many different perspectives.

“During Covid Caius has been really, really good. They’ve listened to us and tried their best to make the best of a bad situation.” 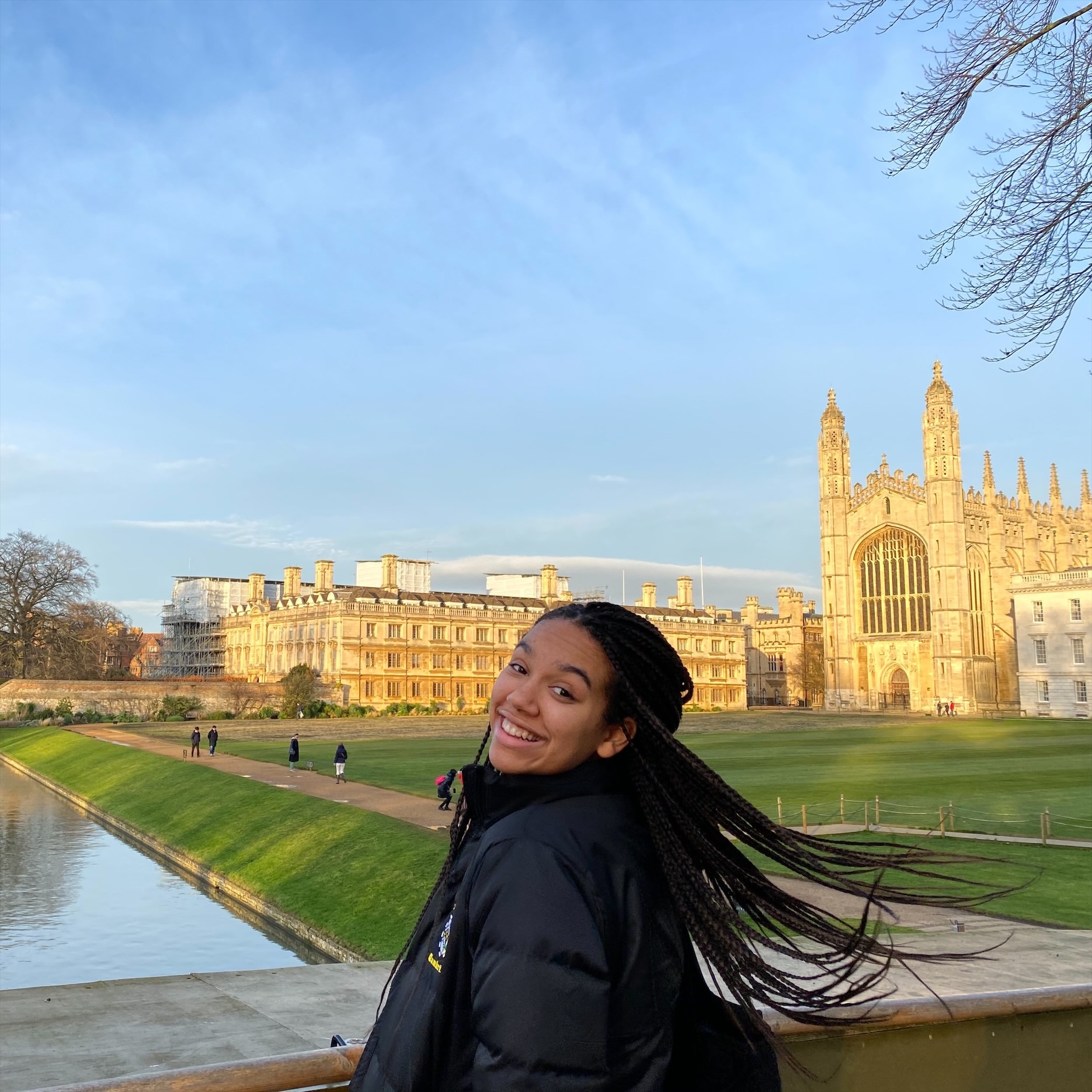 Hannah pictured on the Backs, a view which Caius students see daily on the short journey between West Road and the city centre

Managing the workload and the short deadlines is a skill in itself which will help in her future career, Hannah says.

“I underestimated how difficult Cambridge would be, which was silly of me. I thought it would be academically a bit easier that it has been,” she adds.

“But I have found there’s been loads of support, which I wasn’t expecting. The academics and Fellows and supervisors are always open and easy to talk to and very accessible.

“There’s a skill you’ve got to learn – when is enough enough, and when do I have to move on and accept that this isn’t going to be my best piece of work, or to ask for help. It gets better the longer that you’re here.”