A love of languages

Alexander Yao (Modern and Medieval Languages 2019) discusses his love of language and year abroad spent as a student in Russia and on an internship in France.

“I had never visited Cambridge before I applied and I didn’t even know how Caius was pronounced,” says Alexander Yao (Modern and Medieval Languages 2019).

Alex is reflecting on applying to the University of Cambridge, where he is reading French and Russian. He grew up in Sydney, Australia and a fondness for languages saw him target a place at Caius (reminder: pronounced ‘Keys’).

He spent the first half of the 2021-22 academic year, his third at Cambridge, as a student in St Petersburg, Russia and is now working in Paris, France for the second half of his year abroad. Alex first spoke to the College website in December, but a second interview was necessary due to the events in Ukraine.

Reflecting on the opportunity he had to live in Russia, which now appears unlikely to be available to Russian-language students for some time, Alex wanted to accentuate the positive of his own experience.

“I’m grateful I had the opportunity to go there when I could,” he says from Paris in April.

“It’s a shame for other people who would’ve gone in this half of the year, or tourists in general, who don’t have the opportunity any more to discover what is an amazing place.” 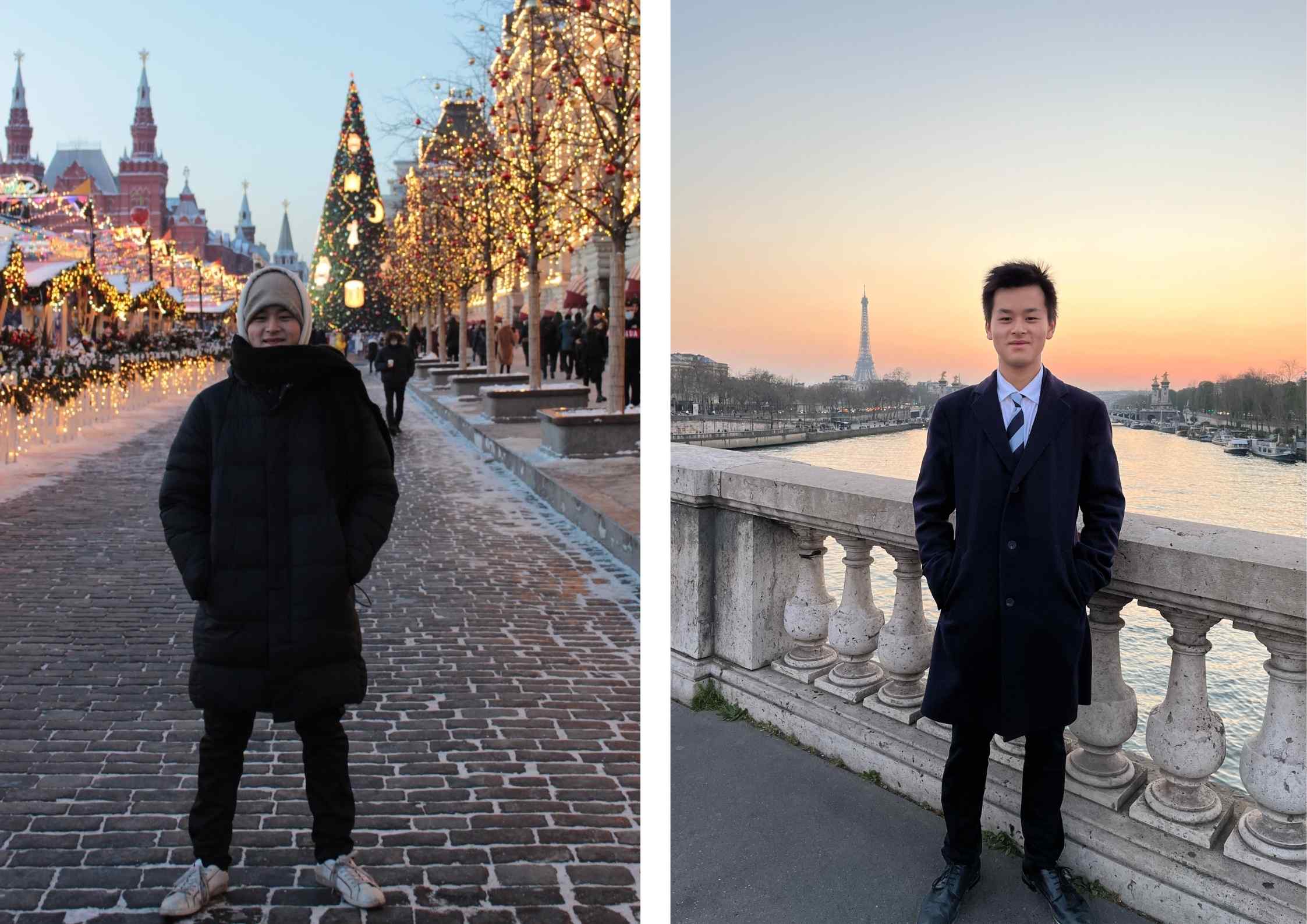 Russia – in particular its people – made an indelible impression on Alex.

Speaking in December, he said: “I thought it would be incredible to come to Russia, and my expectations – although I frankly didn’t know what to expect – have only been surpassed.

“Russia as a country and in the mentality and behaviour of the people is very much a mixture of Asia and Europe and that distinguishes it a lot from any other countries in the world.

“While the places and sights did not fail to bedazzle, it is undoubtedly the encounters and personal relationships I made which I would not exchange for anything, and which remain invaluable to me.

“I’m very grateful to have had these opportunities.”

Russian is not the most obvious choice of language for someone who grew up in Australia to a Hong Kong-born father raised in Bristol. Alex has family in the UK, Hong Kong and Australia, and speaks Cantonese at home, Mandarin with his paternal grandparents and learnt French, German and Latin at school in Sydney.

He was attracted by the challenge of Russian and found a three-week course to learn “the very basics” in Sydney before coming to Cambridge.

Being a student at the St Petersburg State University afforded Alex some flexibility to travel, including on the Trans-Siberian Railway, where he was grateful for the early intensity of his degree.

“In Michaelmas and Lent in first year we felt as though it was all Russian and none of the other language. But coming here I realised how effective that was,” Alex added in December.

“If I hadn’t been able to speak Russian, I could’ve seen the sights and cities, but the experiences I had wouldn’t have been the same. It’s incredible how much I’ve been able to do and see.

“We had people in my compartment on the Trans-Siberian Railway who couldn’t speak any English – and most Russians, even in St Petersburg, which is one of the more international cities here, don’t. I had some really interesting conversations thanks to the fact I can speak Russian. I spent a 37-hour train journey talking with two Russians my age about life in their home towns and their upbringing, while I recounted to them life in France, the UK and Australia; we barely slept and stayed awake the entire night conversing, engrossed in each other’s worlds, and the cultural exchange we had will remain in my memory forever.”

After spending Christmas in Madrid with his parents, who he had not seen for two years due to the pandemic, Alex moved to Paris for an internship with the law firm Clifford Chance.

He has enjoyed the independence of working in and exploring Paris, and reuniting with friends he first met on a two-month exchange from school in 2016. He celebrated his 21st birthday with them.

Work friendships have been established, too, including at a Russian-speakers’ lunch club which has helped keep up that language.

Speaking in April, Alex adds: “This has shown me what a daily routine of a lawyer is and it’s been very helpful. It’s hard work! It’s also very enriching and rewarding if you can withstand the high pressure and stress; if you have a character built for that you can thrive. I’ve enjoyed this environment.

“This experience has made me realise I do want to go straight into the working world after my degree, at least for a few years. I’ve enjoyed the lifestyle I’ve been having.”

Alex was attracted to Cambridge by its proximity to central Europe and the make-up of the MML degree, “the ideal balance between literature, film, and non-language modules, and the language component”.

His admissions interview was his first experience of Cambridge, and although he has not been in the city for almost a year and feels somewhat detached, Alex is ready for his final year without the restrictions of the pandemic.

He adds: “I feel physically separated from the UK and Cambridge is a faraway phenomenon right now. But I’m looking forward to seeing friends and Cambridge going back to normal.”