A fixture in the Caius kitchens

For almost 49 years, David Daisley has been ever present at Gonville & Caius College.

David joined the Caius staff in April 1973, aged 29, and can be found on weekdays working as a Kitchen Porter, cleaning pots and pans in the kitchen.

“I’ve retired, but I haven’t left. Hopefully I’ll work here for a while yet but there will be a time when I shall have to retire,” he says.

Caius is renowned for its catering, with two Hall sittings an evening meaning there is plenty of work for the College’s kitchen staff.

David is 77 years old – he will be 78 in February – and is as conscientious as ever, ensuring he completes his tasks before leaving at the end of his working day. 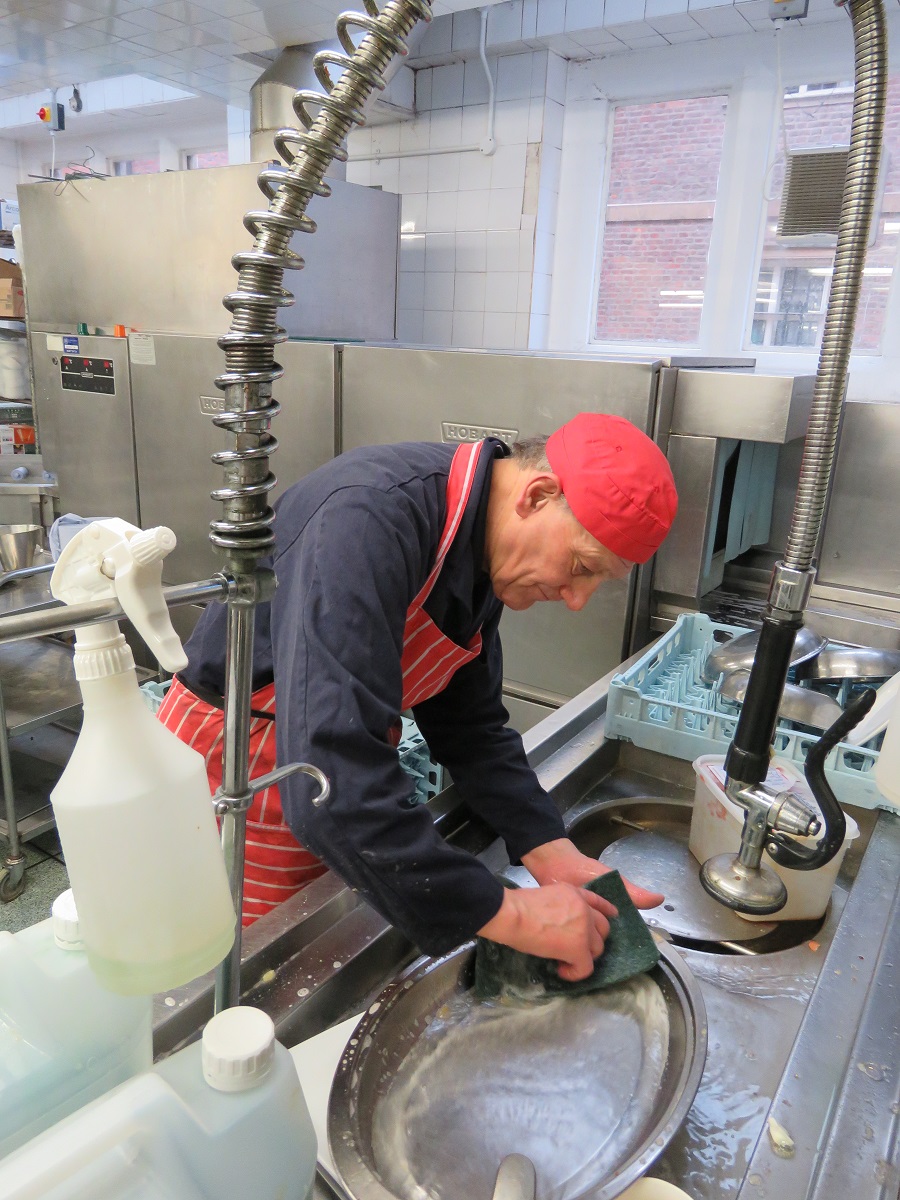 David in the Caius kitchen in 2016

He does not like to dwell on the past and admits he does not like change, but was happy to share some of the history of his remarkable career at Caius.

“I was born and bred in Cambridge,” says David, who was born in the maternity hospital on Mill Road and now lives in a street off the same road.

David worked on a farm in Gloucestershire from 1963 until 1966 and moved back to Cambridge, where he became a kitchen porter, initially at King’s College School. In 1967 he moved to St John’s for six years, before moving along Trinity Street to Caius. He has worked at Caius ever since, apart from a day at neighbouring Trinity in the mid-1970s when Caius’ pastry equipment was being repaired.

David’s colleagues are full of admiration for him.

Acting Head Chef Lee Howell, who has worked with David for 18 years, said: “David takes pride in what he does – he always has and that’s never changed.

“He loves Caius, and he’s always been the same since I’ve known him. Everyone respects him and he’s very sociable around the kitchen.”

David takes pride in what he does – he always has and that’s never changed. He loves Caius

Head of Catering Ricardo Soares adds: “David is a remarkable person, not only as an employee in the kitchens but also someone who shares great stories of his time. He is an avid Arsenal fan and will always talk about the game he heard at the weekend on his radio.

“One of the kindest people you will ever meet, chefs will enjoy David’s stories on a daily basis and I certainly enjoy the random talks about past and present events.”

The kitchen refurbishment undertaken at Caius and completed 12 months ago has enhanced the College’s catering service and been met with universal approval – almost.

David adds: “It’s nice, but I preferred the old kitchen.”