Caian Charlotte Rowlands (Medicine 2016) took on additional challenges in exam season. She faced cold water, wind and rain, jellyfish, and a bout of shingles, to swim the English Channel as part of the University of Cambridge’s relay team in the biennial Varsity Channel relay competition with the University of Oxford.

Six swimmers, who have each completed a two-hour qualifying swim in water 16°C or below, swam for one hour each before handing over to a team-mate in the same order until they reached France. The shortest route is from Samphire Hoe, near Dover, to Cap Gris-Nez, south west of Calais. Swimmers could wear just a costume (no wetsuits!), one swimming hat and a pair of goggles – no goose fat (although a bit of petroleum jelly can ease chaffing) – and swam alongside the navigating support boat. 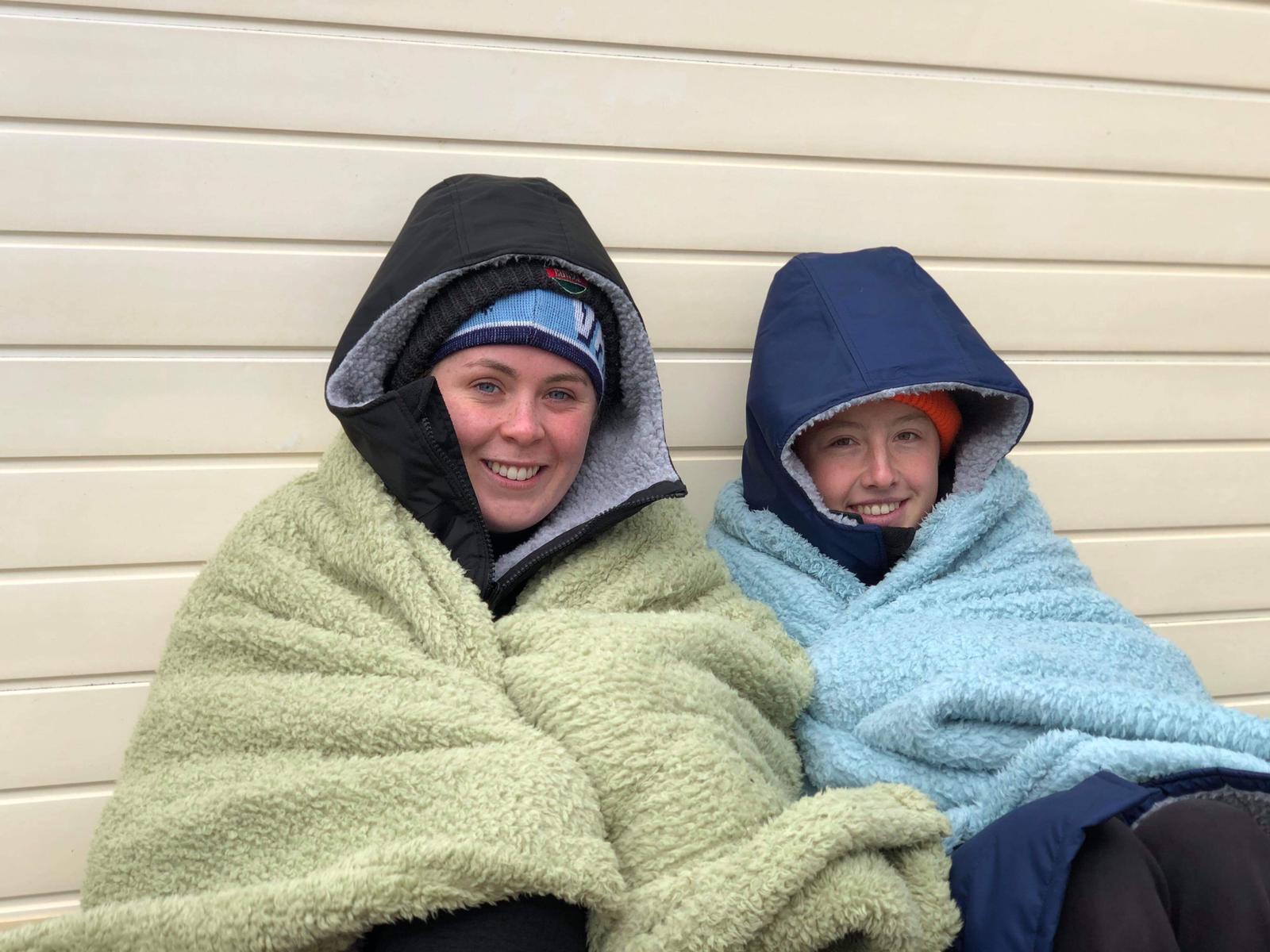 Charlotte, left, and Ella wrapping up to warm up following a swim

I’ve always enjoyed swimming and compete for the University as a sprint freestyle swimmer – 50 metres and 100m. The Channel, which is 21 miles (about 34 kilometres) has always been in the back of my mind since I was little.

I’d never really considered how challenging the cold would be, but I soon found out. For my first swim at Jesus Green Lido, which is unheated and 91 metres long, I started off in my wetsuit, but when I put my face in the water it felt like it was going to fall off it was so cold! The water was 10.8°C. I plucked up the courage to take off my wetsuit and swam for a short time before getting out. 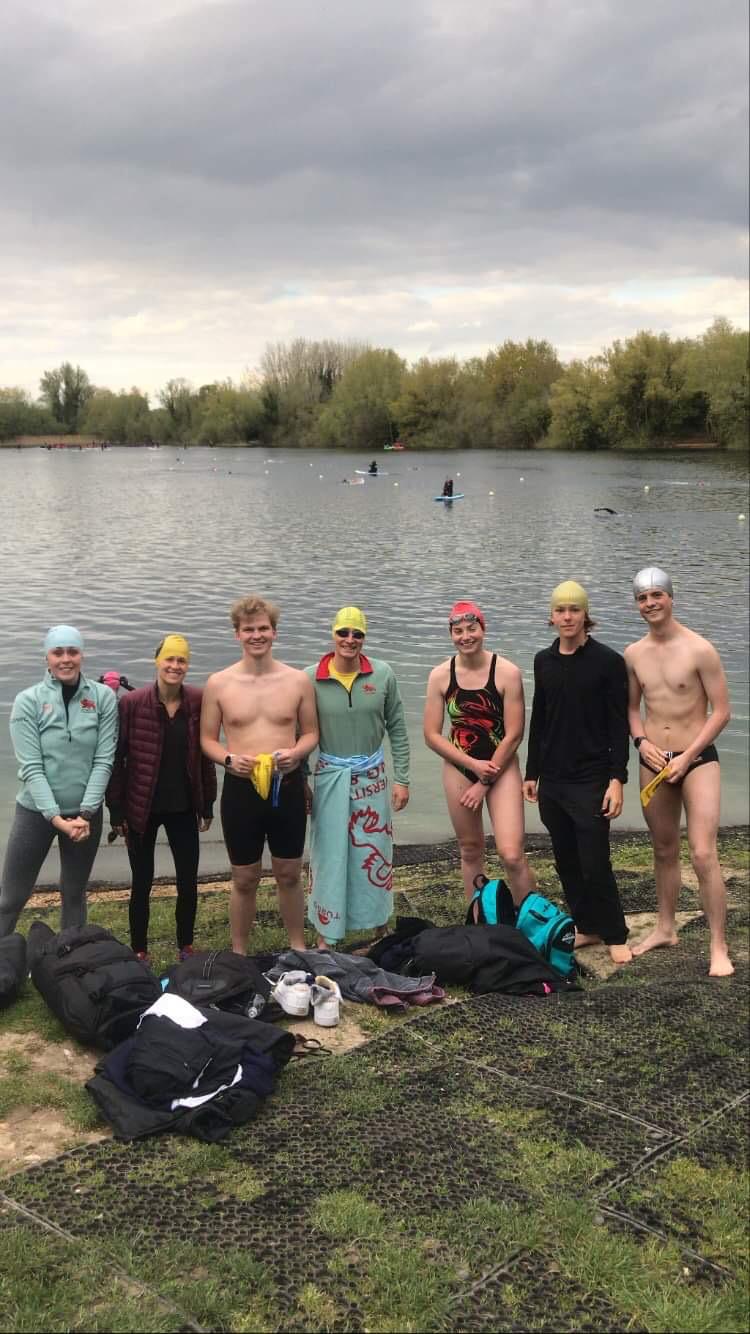 In May and June, we trained at the Lido, or Milton Country Park, pictured above, twice a week, and I was also training in the indoor pool for the Varsity Swimming meet, and the gym. At our first swim at Milton, we arrived and everyone else around us was in wetsuits. Swimming without a wetsuit is something you have to do – you have to psyche yourself up and psyche each other up. There were also a lot of weeds.

We had a few trips to different swim locations. I enjoyed swimming the River Great Ouse. The current pushed us downstream, but it was much more difficult coming back – it took twice as long! We had a glorious weekend in Brighton at the end of May, pictured below. It was my first experience of swimming in a choppy open sea. A seasoned swimmer heard Ella and I talk about salt rub where our costumes were chaffing on our chests. She said the only way to avoid it is to swim topless, so we did. Nothing was visible until a big wave threw us around. Thanks to Ella’s family for hosting us. 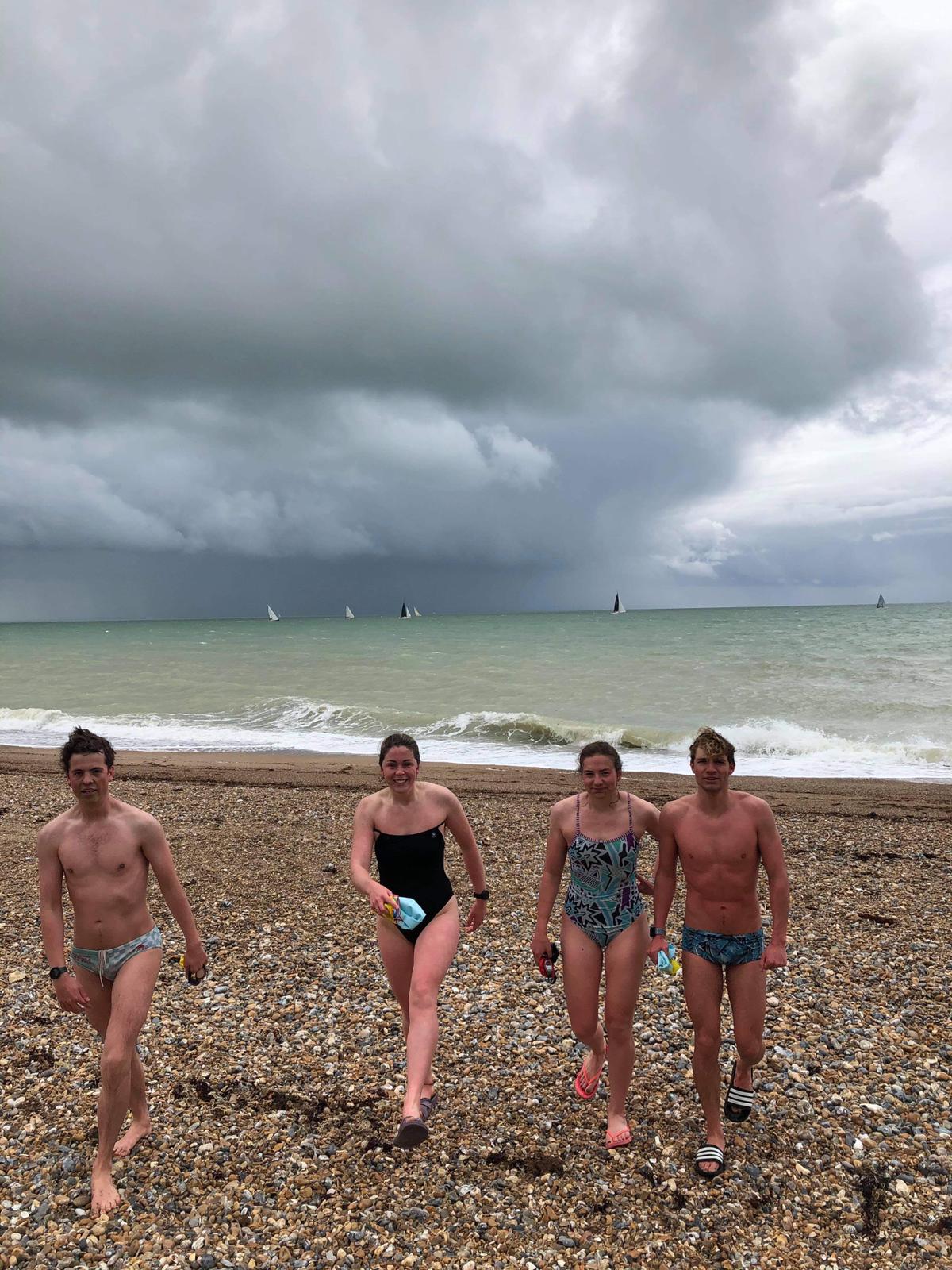 Dan did a Channel solo last summer – 15 hours 15 minutes and received the Channel Swimming Association Award for the 2020 Swim in the Most Arduous Conditions – and was so important to our team. He always kept the morale up, was really positive. He was feeling cold in training sessions and things too, and knowing he’d done it before was reassuring.

We did our two-hour qualifying swim at Milton. At 12°C, the water hadn’t quite warmed up yet, but we didn’t have time to wait, so had to go for it. I’d been pretty cold the week before after a one-hour swim, but we all spurred each other on. I couldn’t feel my fingers for a lot of it! The food vans which had been there and helped us warm up were absent, so we crammed into the car to warm up.

Our swim was scheduled for the penultimate week in June – exact day and time weather and tide dependent – and the week before, I asked Dan what the order would be on the day. You have to alternate gender, and he put me first. He said ‘I feel like you’re the person who won’t complain about the waves or the dark’. I woke up the next day with shingles, and missed a weekend of training alongside the boat in Dover. For five days I couldn’t eat, but after that it was fine. 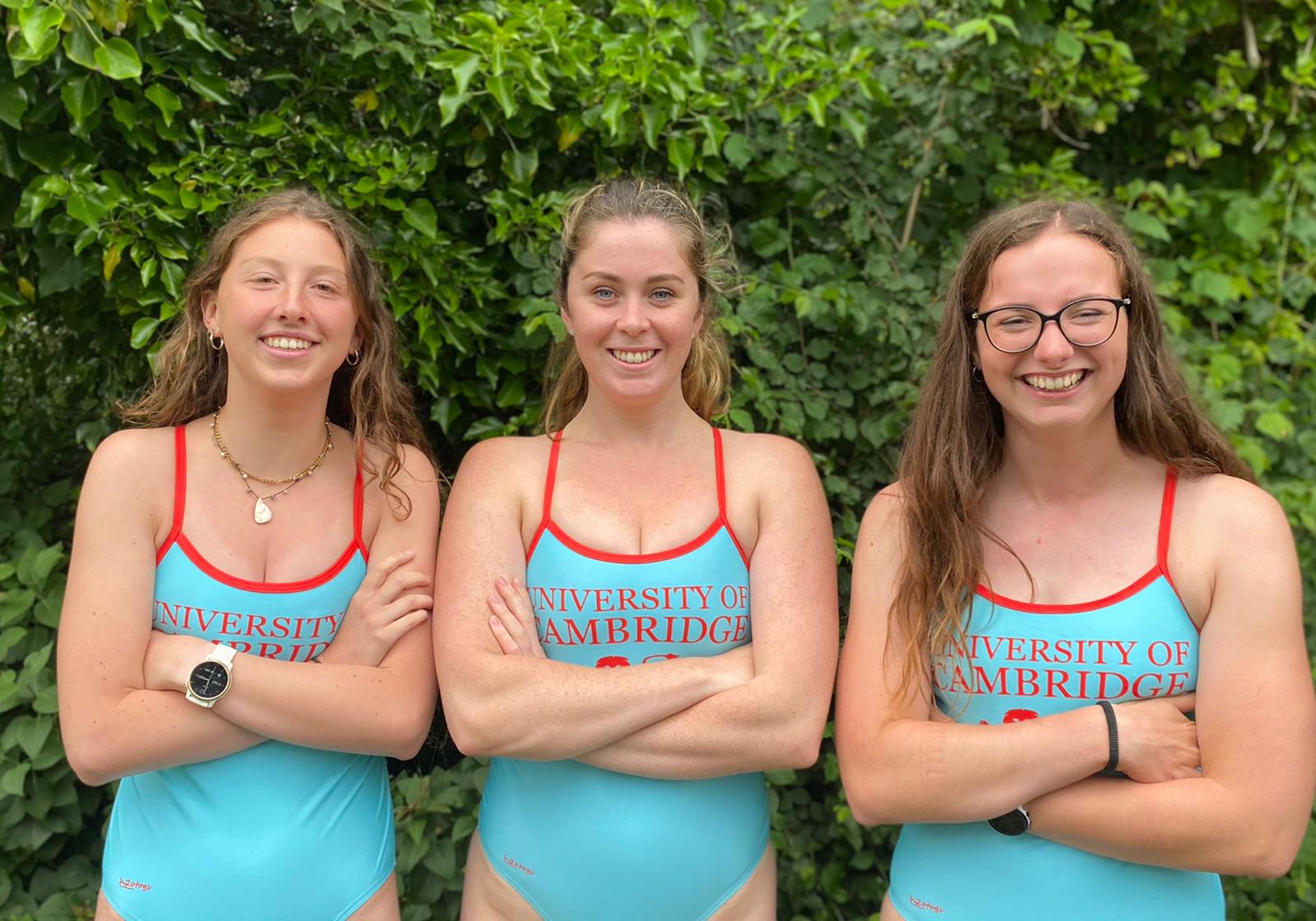 The female members of the Cambridge team: Ella, Charlotte and Evie 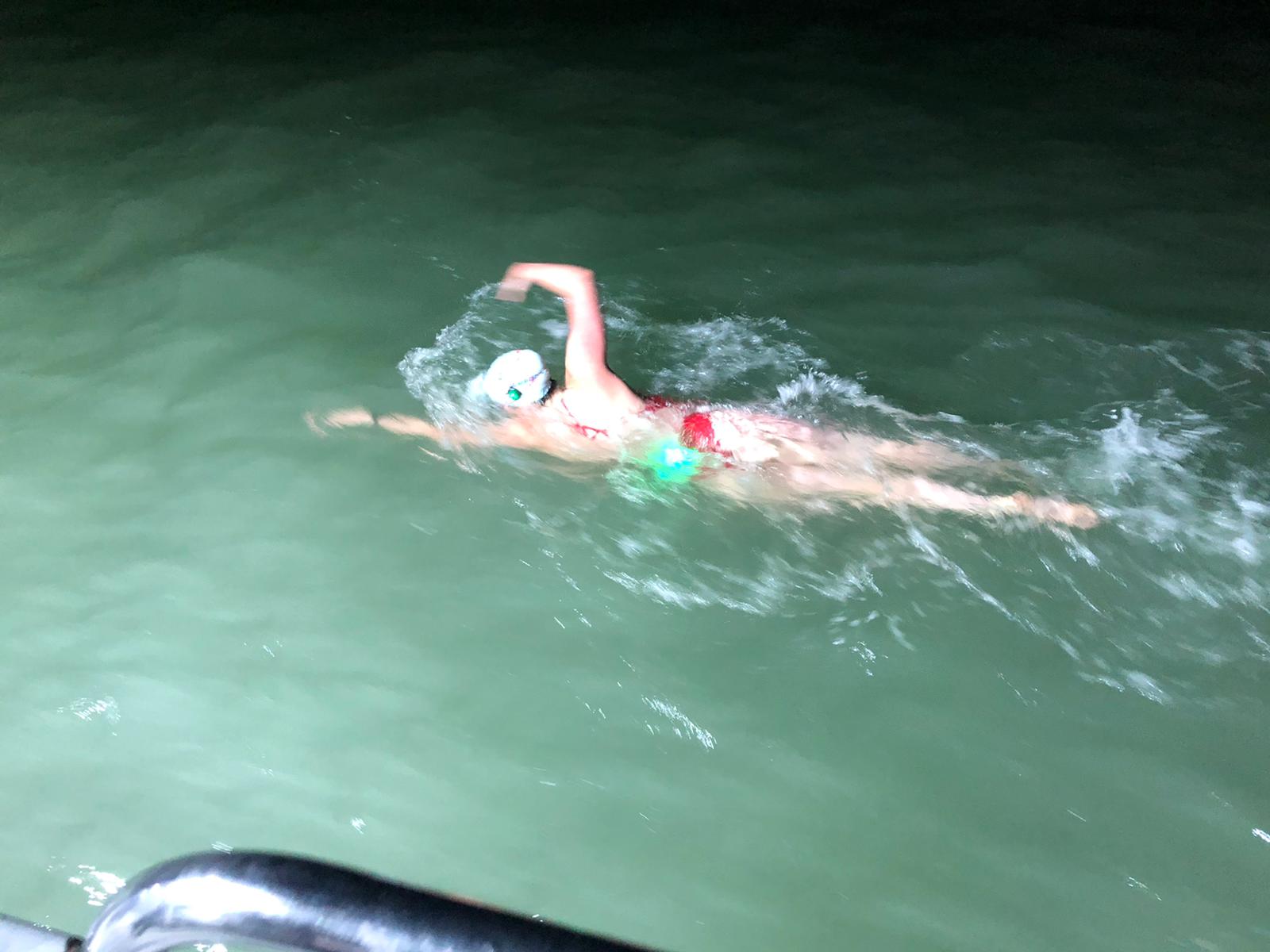 We met up late evening on Wednesday 23 June, and boarded the boat in Dover Harbour for the short journey to the start – Samphire Hoe beach between Dover and Folkstone. I will never forget the adrenaline rush as I hopped off the boat onto the small dingy which took me to the beach in pitch darkness. When your vision is lost, all other senses are heightened. I tuned into the salty smell and the sound of my team cheering me on from the boat and playing my power anthem (Do it Like a Dude by Jessie J). The whistle went just before midnight, and the race was on. Oxford started on the same whistle alongside us. Swimming in the dark, pictured above, is a very strange experience and I was just passing the time until the signal for the changeover came. I kept feeling things on my feet, and it was only afterwards I realised they were jellyfish.

I got dressed quickly to try to warm up, and my second hour was very different, as the sun had risen. There were more jellyfish, but I was like Moses – they parted around me as I swam. Unfortunately, Ella was stung in the face! Kaz took the final leg, touching French soil! Oxford had finished in nine hours 13 minutes – an incredible time – but we felt like winners for completing the crossing.

We had a further success which aided our sponsorship – fundraising for Cancer Research UK and the Marine Conservation Society – when a Facebook promise materialised. On the Facebook page Camfess, where users anonymously comment on events and experiences at Cambridge (some serious issues, others less so), student antics have centred on ‘borrowing’ the sign which encourages users to enjoy the lawn in front of King’s College responsibly. One Camfess user issued a challenge to take the sign out of the country, promising to donate £50 to charity. And we did.

We were composing our own Camfess post with the sign pictured on the boat, off the coast of France, when one of my team-mates tried to reassure us that no-one would know it was us. I said: ‘How many other people are going to Calais this week?’. But it’s fine. We’re not in any trouble, and it was safely returned.

A few days later we had the Varsity indoor meet – in the relative warmth and comfort of the 25m pool at Parkside. I was a little bit off my personal bests, but we won this time!

I think I have found a new obsession in sea swimming after this experience, and I’m definitely going to go for a solo Channel swim in a few years’ time. 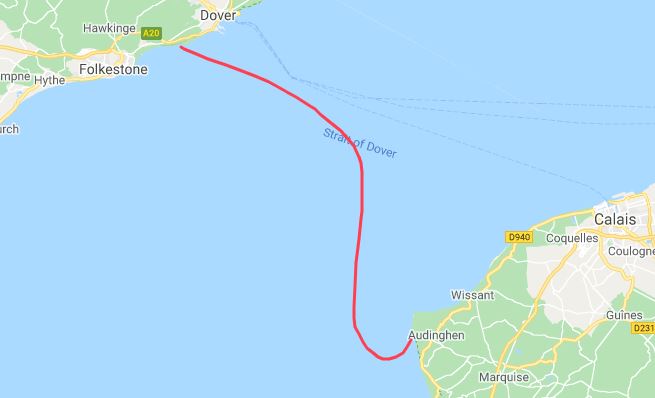 The route of the swim - the 's' shape is due to the tide, which moves up and down the Channel (not coast to coast). The full swim result is on the Channel Swimming Association's website: https://www.channelswimmingassociation.com/swim/5257/cambridge-university