Azmaeen Zarif is making the most of his time at Gonville & Caius College. The third-year undergraduate has paused his medicine degree to study Management at Judge Business School, while also holding the offices of President of the University Bangla Society and Medical Society.

Even the Covid-19 pandemic, and speaking from London via Zoom due to the national lockdown which ran throughout Lent Term, has not dampened his enthusiasm.

“The last three years have been exceptional. I mean, it's been everything I've dreamed about of Cambridge and more,” Azmaeen says.

“Whilst I'm sad that the last year or so has been faced with difficulties, I'm here for three more years.

“There are challenges, whether they’re about academics or Covid, or just in general. But we can't make changes unless we are actively engaging. I've tried to do that, and I will try and do that for my remaining time here, and hopefully try to contribute to the improvement of Caius and Cambridge.

“It's nice to see that the College and University are being receptive and working with the students.” 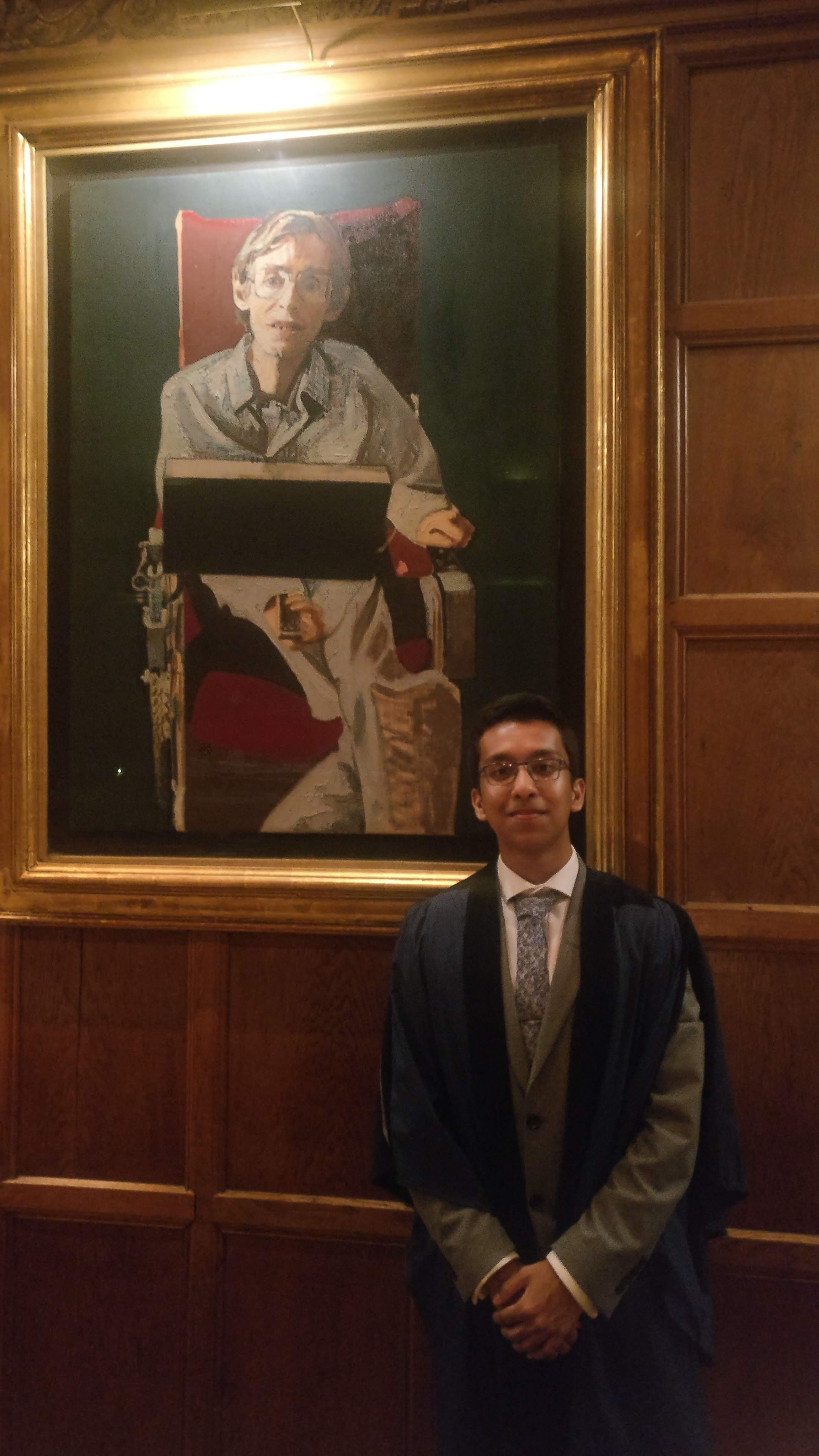 Azmaeen pictured at Caius by a portrait of Professor Stephen Hawking

“I wanted to take a year out from science, just having studied it for so long now and I will be doing it for the rest of my life,” he says.

“That was that was one of the motivations and some of the modules in the management studies course were really quite interesting: micro-economics, a macro elective, accounting and finance and a corporate finance elective.

“It was nice to get away from the scientific aspect and look at more the humanities, the quantitative applications. It was really the perfect course for me for Part II.”

The pandemic has shown the importance of a broad view in healthcare.

He adds: “You need to be able to deal with the patients, but you need to look at the overall healthcare system and challenges that are coming up in terms of resource constraints, and greater pressures for workers and the patients.” 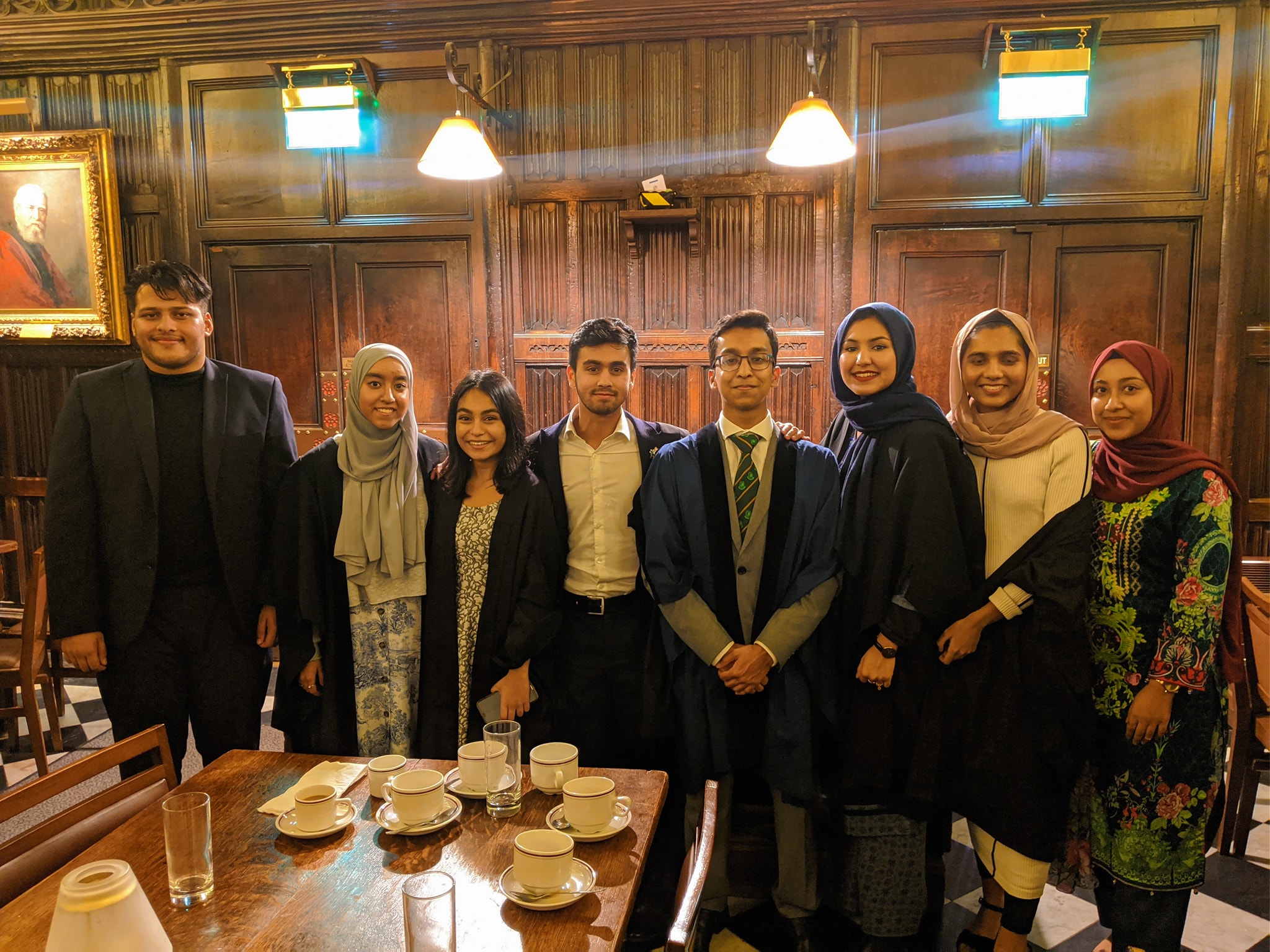 Azmaeen, fourth from right, with friends at a BanglaSoc event (pre-Covid-19)

Being President of two University societies, Azmaeen says, “has been a privilege”. As well as his society commitments, Azmaeen also took part in novice rowing with Caius and University archery while in Cambridge in the autumn.

“It's time management,” he says. “At some points it has been tough, especially in the year that it has been.

“My calendars would just be filled and there was a lot of cycling from one place to another in Michaelmas.”

His election as BanglaSoc President came prior to the March 2020 lockdown, resulting in a need to change tact as we were all forced online. His MedSoc position runs in tandem with the academic year.

When lockdown began, BanglaSoc, in partnership with other Cambridge University South Asian societies, thought globally, raising nearly £1800 to support daily-wagers across Bangladesh, Pakistan and India due to the challenges that their livelihoods faced at that time with lockdowns coming in around the world.

Azmaeen this year has had to play a pastoral role with the Bangla Soc and MedSoc committees, consider all members of the societies – there are 150 members of BanglaSoc, although all are welcome, and over 600 undergraduates in MedSoc, with many more graduate and life members – and use his positions to contribute to department and University decision making.

Previously Azmaeen was Welfare Officer of MedSoc, so prioritising the mental health of medical students suddenly studying online was a natural priority. He established training provision with Mental Health First Aid England for training courses, and set up a student-led mental health support provision network across the University for students.

“This was quite important before, just generally over the medical degree, but with Covid it was just made even more pertinent,” he adds. 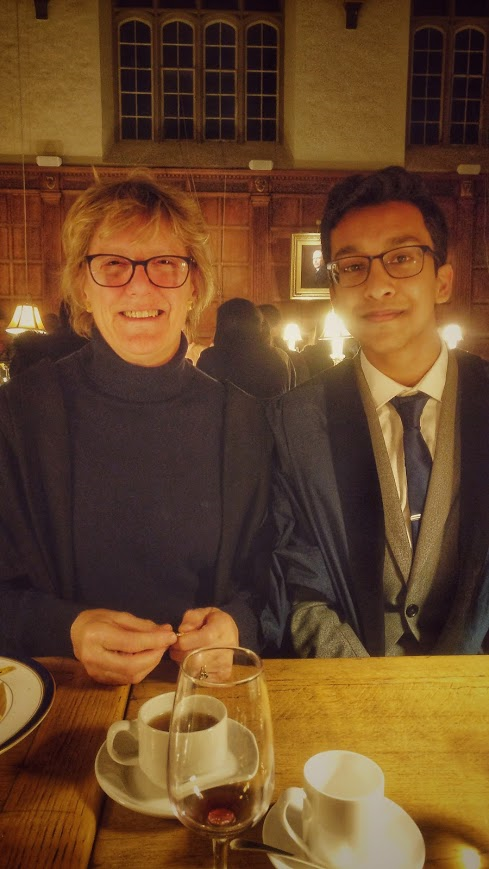 “With a focus on academic rigour we sometimes forget students and the challenges that they are facing as well so that's been something that's quite big,” he says.

One of the benefits of life shifting online has been the opportunity to host speakers from different locations and time zones. Oxford’s Professor of Primary Care Health Sciences Trisha Greenhalgh, WHO director Professor Anthony Costello of UCL, and Dr Raj Panjabi, the US Global Malaria Coordinator for President Joe Biden’s Malaria Initiative, have all been guests, alongside Cambridge academics.

The MedSoc also organised mock interviews for candidates in the admissions process, supporting preparation for online interviews, while the forthcoming MedSoc access conference is to be opened up internationally, with partnerships with universities around the world.

As a British Bangladeshi, Azmaeen is keen to share his experiences.

“Representation matters,” he says. “Hearing the concerns and hearing them answered by people who look like you and who may have shared a similar background definitely helps.”

His message is simple. “We’re here. So if we can do it, you can do it too. Don’t de-select yourself by not applying,” he says.

Azmaeen also set up a BanglaSoc alumni mentoring network in partnership with older members, covering all industries, with support from people at McKinsey through to the Civil Service, to address post-graduation challenges facing members in the working world. 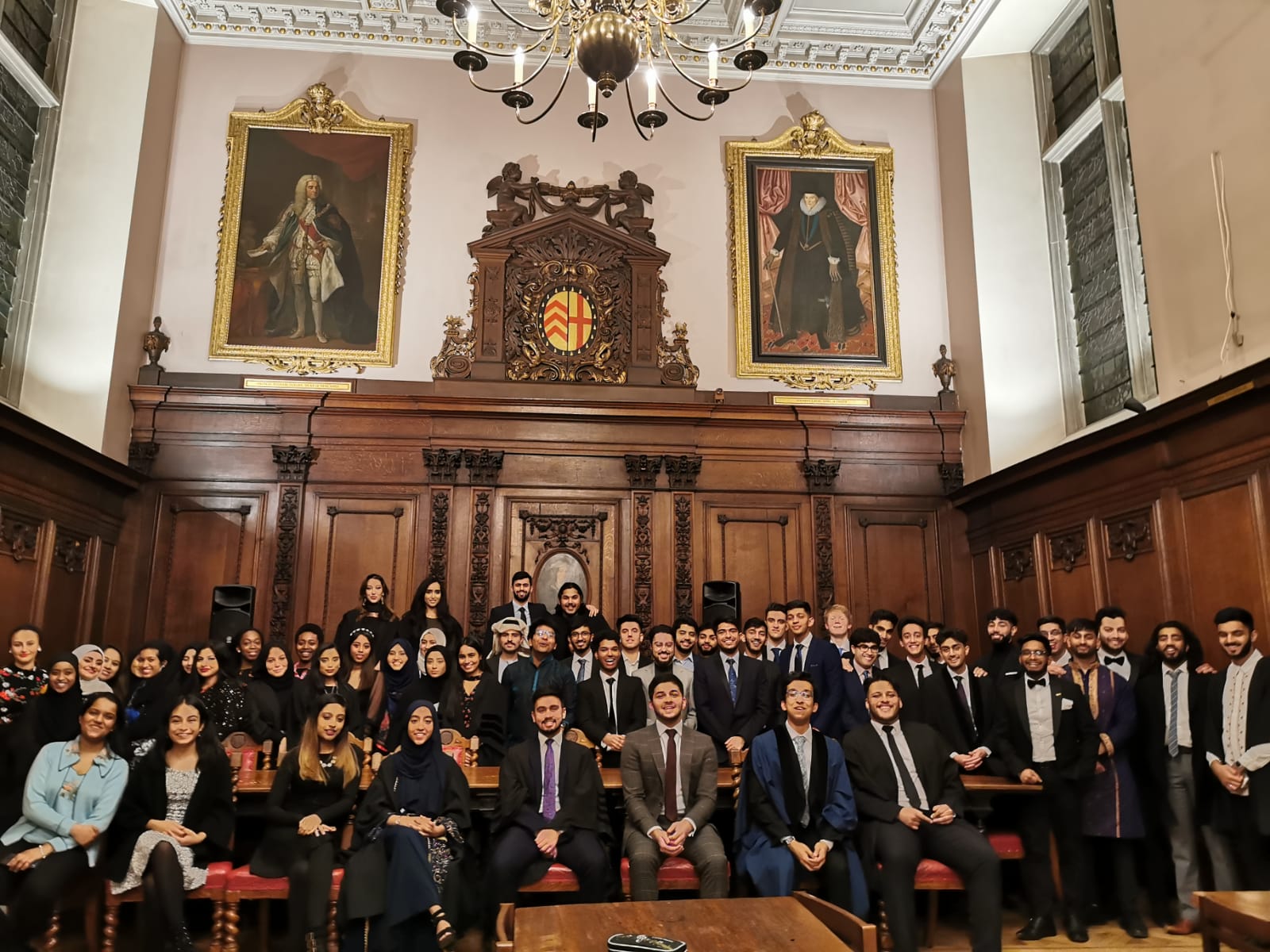 A group picture from a BanglaSoc event (pre-Covid-19), with Azmaeen pictured seated second right in the front row

This year is an important one for Bangladeshis, celebrating 50 years of independence. The anniversary of the declaration of independence is on 26 March, with Victory Day celebrated on 16 December.

“it's a momentous time because it's a relatively new country and there's so much rich history and culture about Bangladesh that has preceded its 50 years,” Azmaeen adds.

“The opportunity to celebrate that in my role and direct the society has been quite a quite a privilege.”

Azmaeen says: “What we're doing is trying to celebrate the kind of achievements that the diaspora of Bangladesh have achieved in just the last 50 years, and looking into what us as students can do in the next 50 years as we approach the centenary.”

Azmaeen is a practising Muslim, attending the Cambridge Mosque, and once the new Central Mosque, almost a mile further along Mill Road, and using University venues for faith, when Covid allows. He has appeared in a University video about Ramadan (https://www.youtube.com/watch?v=29UEF9Ksn04), which coincides with exam season.

His housemates have been intrigued by his night-time eating, due to fasting times, and curious to learn about religious practises like Ramadan and Eid, which celebrates the end of the fast.

He says: “My generation, since we've been doing GCSEs and A-Levels, we've pretty much had Ramadan overlap with exams one way or another. We're pretty used to it by now and it's not too bad.

“I remember in first year my final anatomy exam was on the day of Eid, the end of Ramadan, and it was a nice celebration to get anatomy out of the way!” 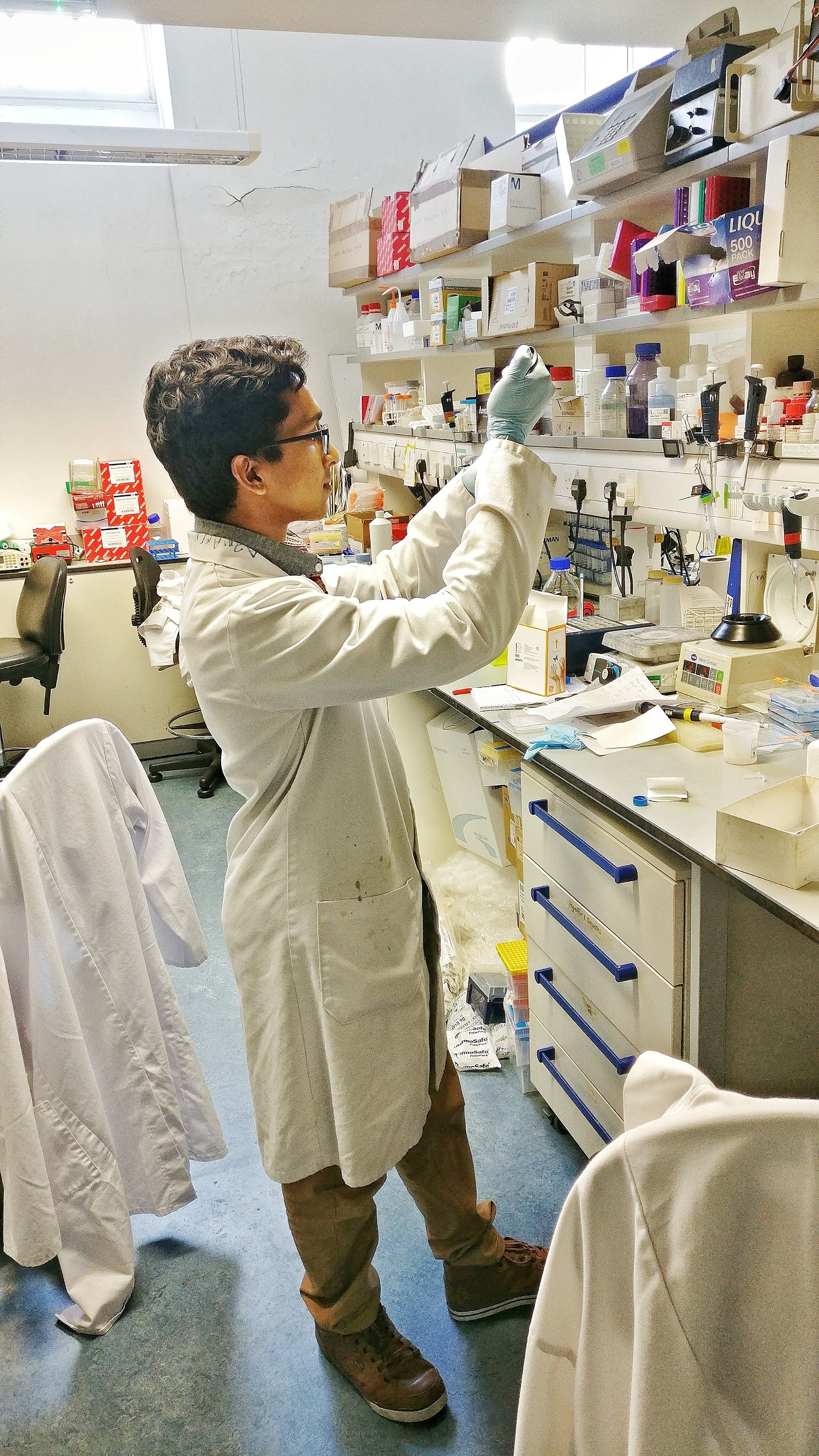 As for the future, Azmaeen is uncertain what medical specialism to follow. He has undertaken internships in Biochemistry, under Caian Dr Johanna Rees, at University of Oxford Nuffield Department of Primary Health Care Sciences, and in Epigenetics at the MRC London Institute of Medical Sciences (Imperial College London) under the supervision of Prof Dame Amanda Fisher and Prof Matthias Merkenschlager.

“I’ve got three more years over at the Clinical School then two years of foundation training so time to decide!” he says.

Until then, he is sure to keep himself busy.