UTIs are among the most prevalent bacterial infections, affecting 150 million people per year, with 75% of infections occurring due to uropathogenic E. coli. Research from Dr Summers and Dr Ashraf Zarkan in the Department of Genetics at the University of Cambridge has highlighted the inhibition of an E. coli enzyme as a plausible route to reduce pathogenicity and increase antibiotic effectiveness in UTIs.

Dr Summers has spent much of his career working on E.coli. His focus was on indole signalling, and Dr Zarkan scrutinised the enzyme that produces indole in a bid to address resistance to antibiotic treatment.

They discovered this resistance was structural, due to a biofilm which allows bacteria to huddle together and be shielded from the effects of the drugs. Once the danger of the drugs has receded, the infection reestablishes itself, leading to recurring symptoms.

They wondered if they could inhibit the enzyme which produces the biofilm, and improve the chances of treatment. The theory works.

A collaboration with Cresset Discovery, which offers computational solutions for drug discovery and is based south of Cambridge, identified prospective compounds, and this is where the intellectual property of the project lies.

“We’d always been on the lookout for novel approaches and we’d begun to wonder whether we could interfere with the communication process of bacteria and whether we could use that to either enhance the activity of antibiotics, make them more effective, to assist existing antibiotics or to depress resistance,” Dr Summers says.

“In the bladder, where 75% of infections are caused by E.coli, they form an invasive film on the wall of the bladder and they present a real problem. The antibiotics kill the bacteria that aren’t in the biofilm, so the symptoms go away for a bit but when the patient stops the antibiotic, the symptoms come back and the patient goes back to the GP.

“Under normal microbiological tests they’ll be sensitive to the antibiotic, but the same thing will happen again if treatment is repeated. You get recurrent cycles of infection which are very difficult to treat.

“We wondered if we could block the communication process that the bacteria were using to make a biofilm, maybe we could stop the biofilm forming and stop the recurring infection. You need to find an inhibitor to stop the tryptophanase enzyme. We knew our target, we just needed something to inhibit it.

“Having started with several million potential candidates, we’ve got down now to about ten compounds that we think are pretty active. We’ve tested our compounds against living bacterial cells, both lab strains of E.coli and then strains isolated from patients with UTIs, and they do prove quite effective.

“We’ve got the evidence from the lab against the uropathogenic strains that when we apply these drugs we can stop the generation of biofilms.” 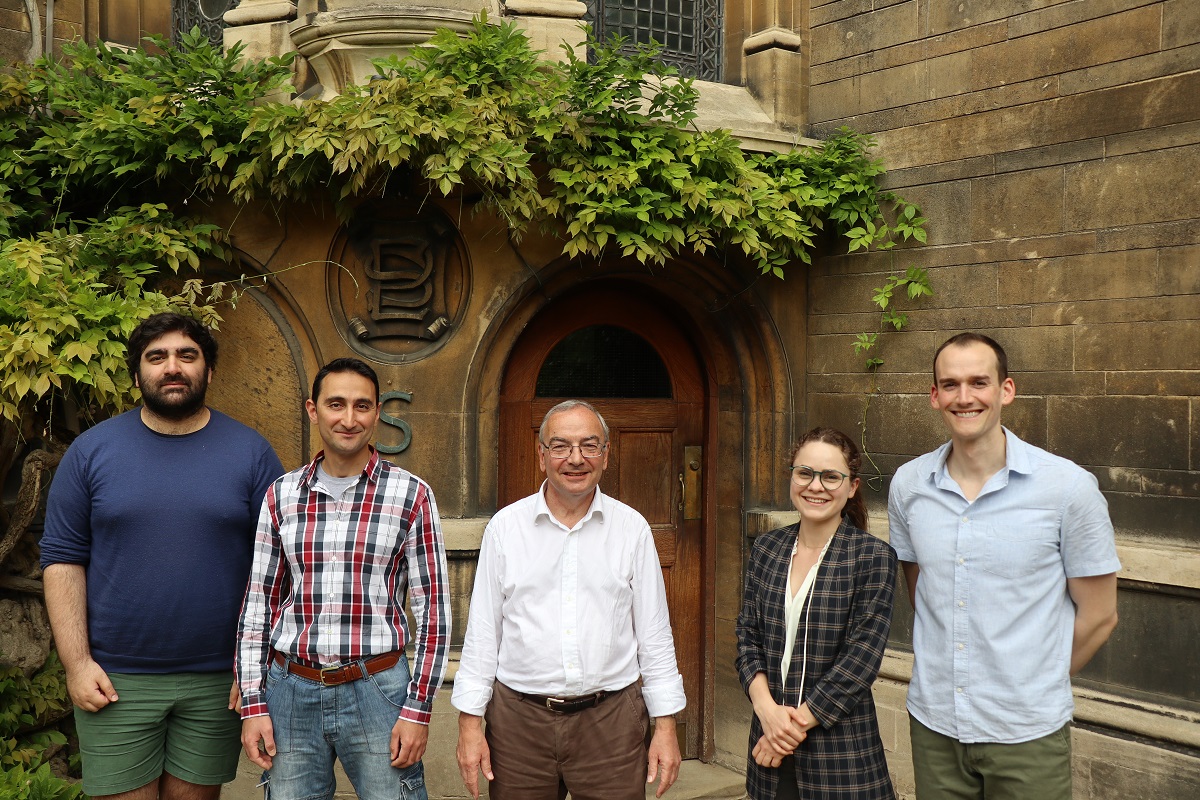 The next step is further laboratory testing before clinical trials.

Dr Zarkan adds: “I hope to see it on the shelf, prescribed by the NHS as soon as possible, but drug development takes time. If we get there in six years I’d be over the moon, but if it takes longer I wouldn’t be surprised. But I’m confident we’ll make it, that one of those compounds will be used to treat UTIs.”

There is an added dimension to the story. Dr Summers retires from his University position at the end of this academic year – he will remain a teaching Fellow and Director of Studies at Caius – and he is mentoring Dr Zarkan, who is on a transition to independence fellowship.

They bestow compliments upon each other, and it is clear their skills have been complementary in this research.

“I learned from David that research is not about you or what you think, it’s about where the data takes you,” Dr Zarkan says.

“It was beneficial to have someone with David’s experience, who knows the ins and outs of what I’m trying to do. He has some interest in translational research – he did spin out a company in the past, which was another reason why I approached him to work with him.

“And he sometimes drags me back to confirm the proper science and move step by step. Having someone open and interested in translational research and doing things by the book and pursuing the potential, if it’s there, worked amazingly.” 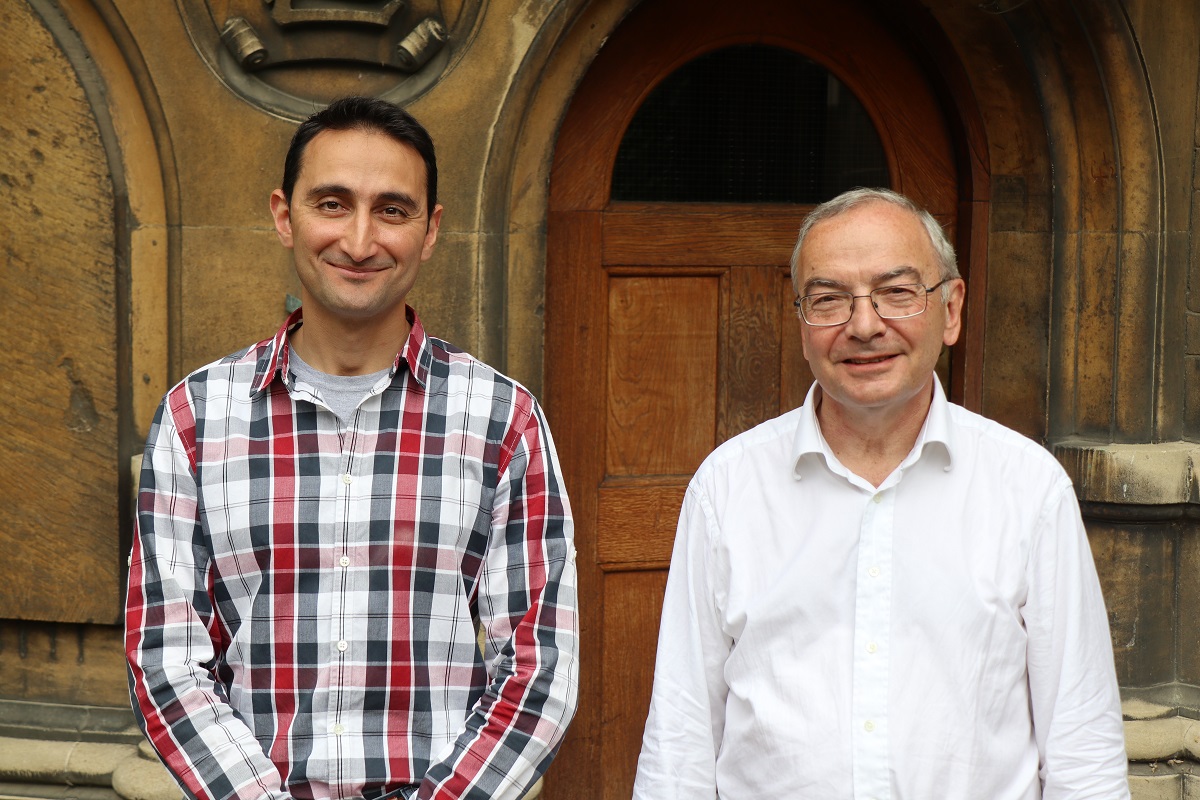 Dr Zarkan trained in three laboratories in the Department of Biochemistry, under Dr Hee-Jeon Hong, Professor Martin Welch and Professor George Salmond. He began working with Dr Summers around six years ago, after initially watching a “fascinating” talk, and being impressed by Dr Summers’ leadership and personal skills with his colleagues.

“He hired me to do interesting research related to the mechanisms of Indole bacteria, to look at the signalling pathway in bacteria and probably my best achievement in the first three years is to prove his hypothesis wrong," Dr Zarkan says.

"He had an amazing hypothesis that would unite the whole field. I came along, looked into it, did a few experiments and said ‘I’m sorry, it’s wrong’. And we published that.”

Dr Summers is enthused by the project, despite it coming late in his career.

He says: “It affects so many people. When I sit down next to somebody and they ask what I do and I tell them, you can see if they are in the 50% of the population who are affected by UTIs and they get really interested saying ‘is this going to work?’ ‘when’s the drug going to be ready?’ and that sort of thing.

“A urology consultant at Addenbrooke’s said about 50% of GP appointments are associated with UTIs. If the majority of those are recurrent infections, which is what we’re targeting, then instead of the patient coming six or 10 times over the years, they just come once, it would make a huge difference.

“That really enthused us and made us want to do something, because it’s a problem where you can help on a number of levels. You’re helping the individual patient, and you’re helping the system as well.”