Shielding in student accommodation and training on a rowing machine is less than ideal preparation for the Boat Race, but Ben Dyer is determined to seize a unique opportunity after being selected for rowing’s most famous event on 4 April.

The 28-year-old had thought his chance had gone when the 2020 Boat Races were cancelled due to the Covid-19 pandemic. He had been selected for Cambridge’s reserve boat, Goldie, and his PhD in Engineering – more of which later – was due to finish. An extension from his funding agency, the Engineering and Physical Sciences Research Council (EPSRC), gave him another opportunity.

Ben has Crohn’s Disease, a lifelong condition where parts of the digestive system become inflamed, and has been shielding during the pandemic at Harvey Road. Plenty of quality sleep and careful nutrition are key to manage the condition, he has had his first vaccination injection, and he has relied on his girlfriend to collect groceries and his prescriptions.

Following the cancellation of the 2020 event and the uncertainty we all felt early in the pandemic, Ben threw himself into training twice daily on equipment borrowed from Caius Boat Club and Cambridge University Boat Club.

“Making Goldie was all I had ever set out to achieve in rowing and just a week after my selection it was taken away,” Ben says.

“That was it, and I didn’t have enough time to do another season. I dealt with it by training harder.

I’ve got one shot at the Boat Race. It’s a once-in-a-lifetime opportunity.

“Then my funding was extended by six months, which meant instead of running out at the end of this month, I now have an extra six months to write up, giving me the opportunity to do another Boat Race campaign.

“I’ve got one shot at the Boat Race. It’s a once-in-a-lifetime opportunity.”

Until the Government earlier this month granted the Boat Race teams – and only the men's and women's Blue boats – elite athlete status and with it an exemption to allow them to train in groups, Ben was training at Harvey Road.

Selection was squashed into 10 days when the rowers did return to the water. With the Goldie race (of the reserve boats; Oxford’s is called Isis) postponed – and maybe cancelled altogether – Ben knew he had no fallback if he was not chosen.

“I was very much on the cusp. As someone who had learnt at College, I was competing against much more experienced guys,” he adds.

“I had been in a very tight selection battle. I’d done three sets of direct swaps, where you switch seats in a boat, in six days. I found out on 18 March, and I was incredibly relieved that selection was over. It took a while to sink in that I’d be in the Blue Boat.

“I had never even considered making the Blue boat before. It’s only this year I realised it was possible.” 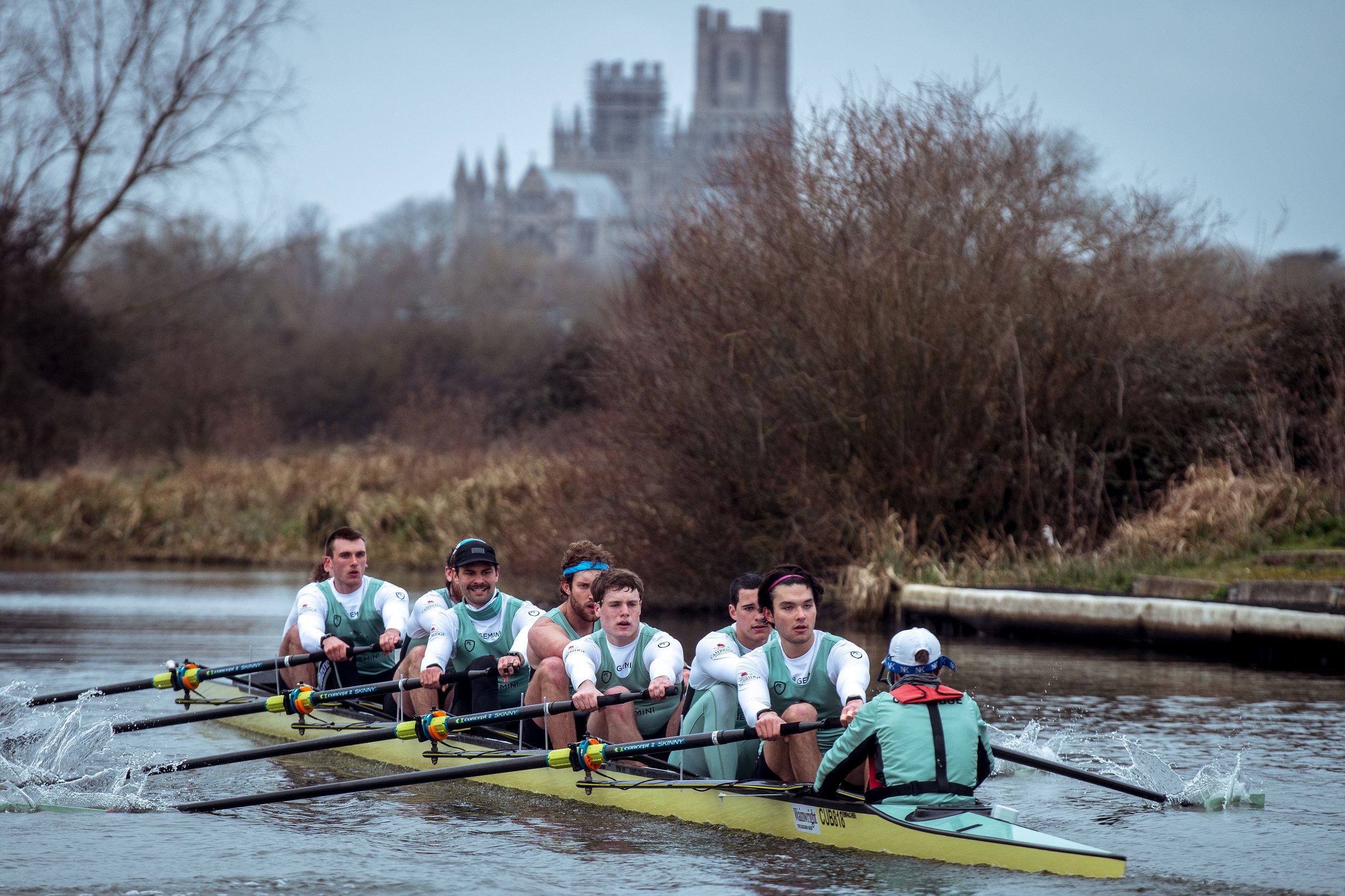 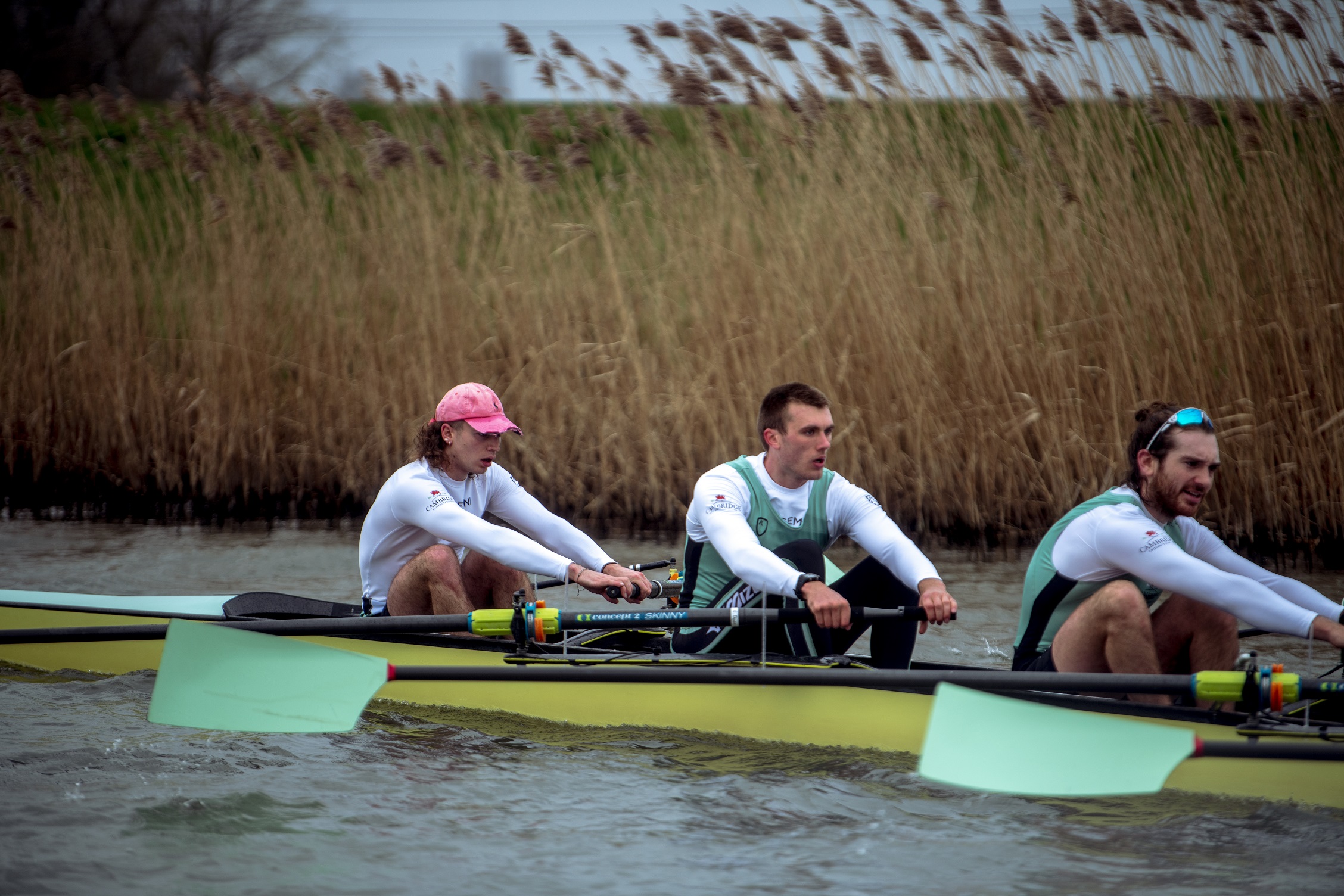 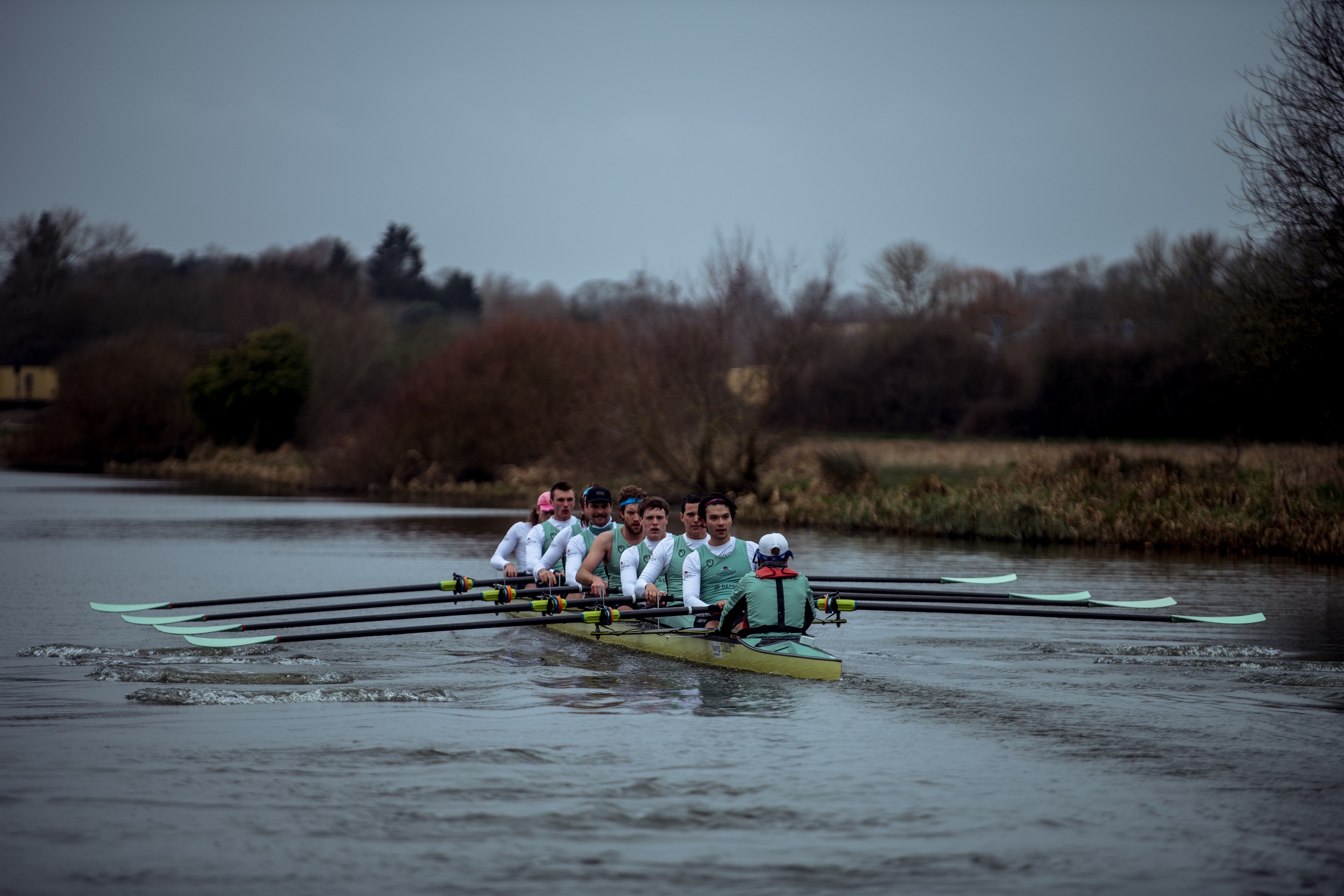 Ben Dyer in seat two (second from back) as Cambridge make their final preparations in Ely (credit: Benedict Tufnell/ROW360)

The race with Oxford has been displaced from the Thames to the Cambridgeshire Fens and the River Great Ouse, but Ben is looking on that positively.

“It’s a really unique opportunity to do the Ely Boat Race; it’s the one people are going to speak about for years to come,” he says.

“The Tideway’s very iconic. I did experience the day in 2019 as a race day spare. I would like to experience the walk out through the crowds and the helicopter overhead…

“But I recognise it’s an excellent opportunity. We are the Ely Boat Race. This one stands out, and it feels special to be part of it.

“The only dampener will be Covid regulations, with no friends and family and team-mates, like the Goldie guys. And how do you celebrate at the end? We’re in a bubble, so will we be allowed to hug the guy in front of us in the boat?”

We are the Ely Boat Race. This one stands out, and it feels special to be part of it.

Ben and Cambridge will hope any hugs are celebratory rather than in commiserations on a course which is regarded as the Light Blues’ home water.

“Is there an advantage? Oxford will say yes, Cambridge will say no,” Ben adds.

“I essentially learnt to row in Ely; 95% of my rowing has been up and down the race course and I do know every bush, tree and post on that straight. With no spectators and just some drones overhead it could easily feel like a training session.

“I think it will be a balance of familiarity versus not being complacent.”

At 4.9-kilometres, the straight-line Ely course is 2km shorter than the bending London route, but the lack of tide and slow flow of the river will mean it takes a similar time to cover a similar distance.

Ben adds: “Whilst it is shorter, you approach it in much the same way. The Boat Race is usually decided by Hammersmith, six minutes in. It’s almost always decided by Chiswick Steps 10 minutes in, and by Barnes Bridge, three minutes from the end, only three times has it been overturned. If you were to re-run all 165 Boat Races on the Championship course only three would’ve had a different result if they finish line came three minutes earlier, like it will in Ely.

“The main difference is the fact there’s no turns. It’s been described as more of a boxing match, because it’s trading blows rather than strategically waiting for your corner.”

Ben relishes such an occasion.

“Having another crew alongside will be the main motivating factor for me,” he says.

“The adrenaline boost you get from that is huge. Personally, I perform a lot better in that format, rather than in a time-trial.”

Ben completed his undergraduate degree in Engineering in Aberdeen, where he grew up, before moving into industry, initially in Aberdeen and then in Dubai. He knew he wanted to do a PhD, the title of which is ‘Novel coatings for soft magnetic composite materials’.

“It’s trying to make electric aeroplanes viable by improving the core material and thus the efficiency of the electric motor,” Ben says. 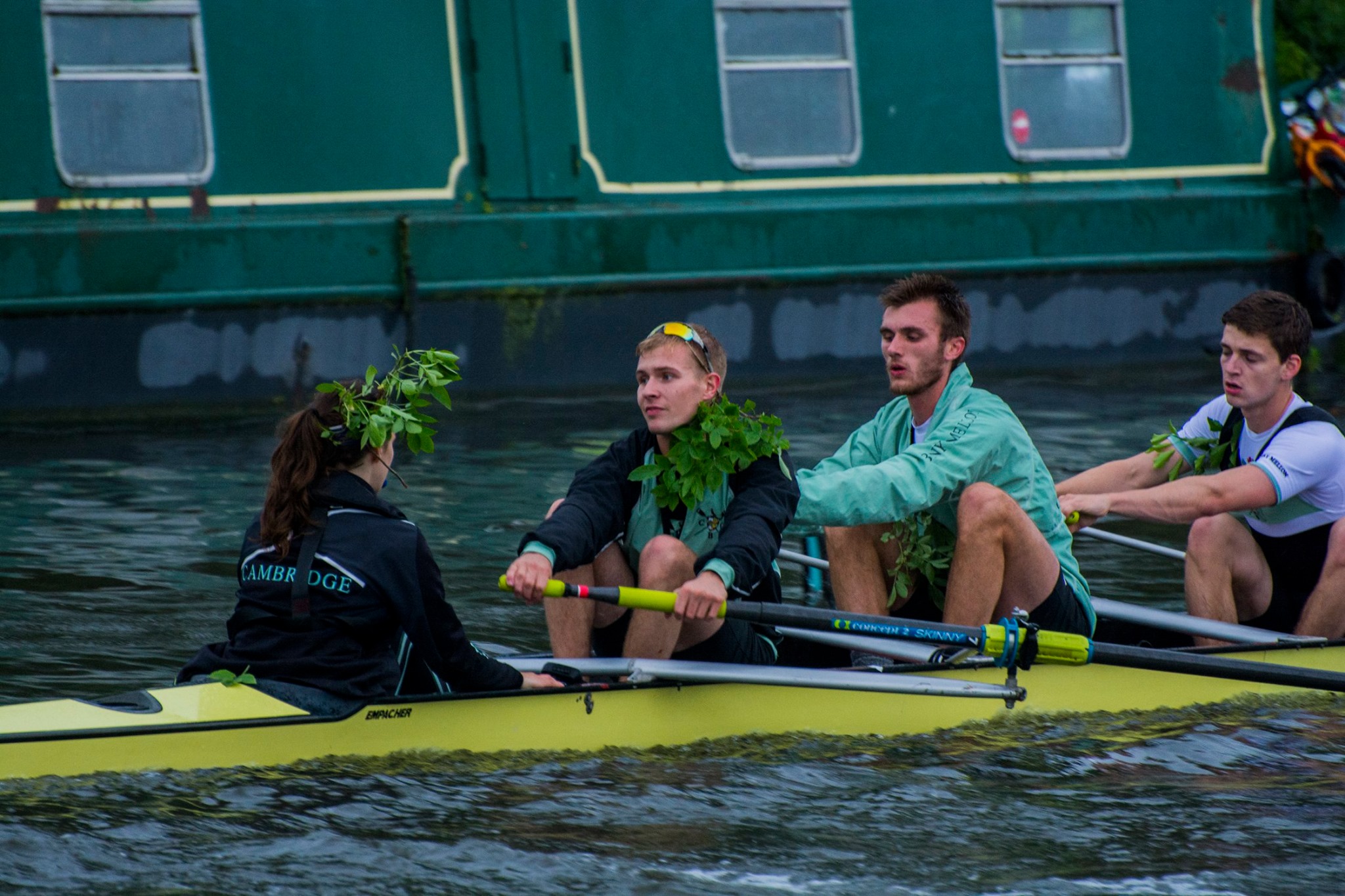 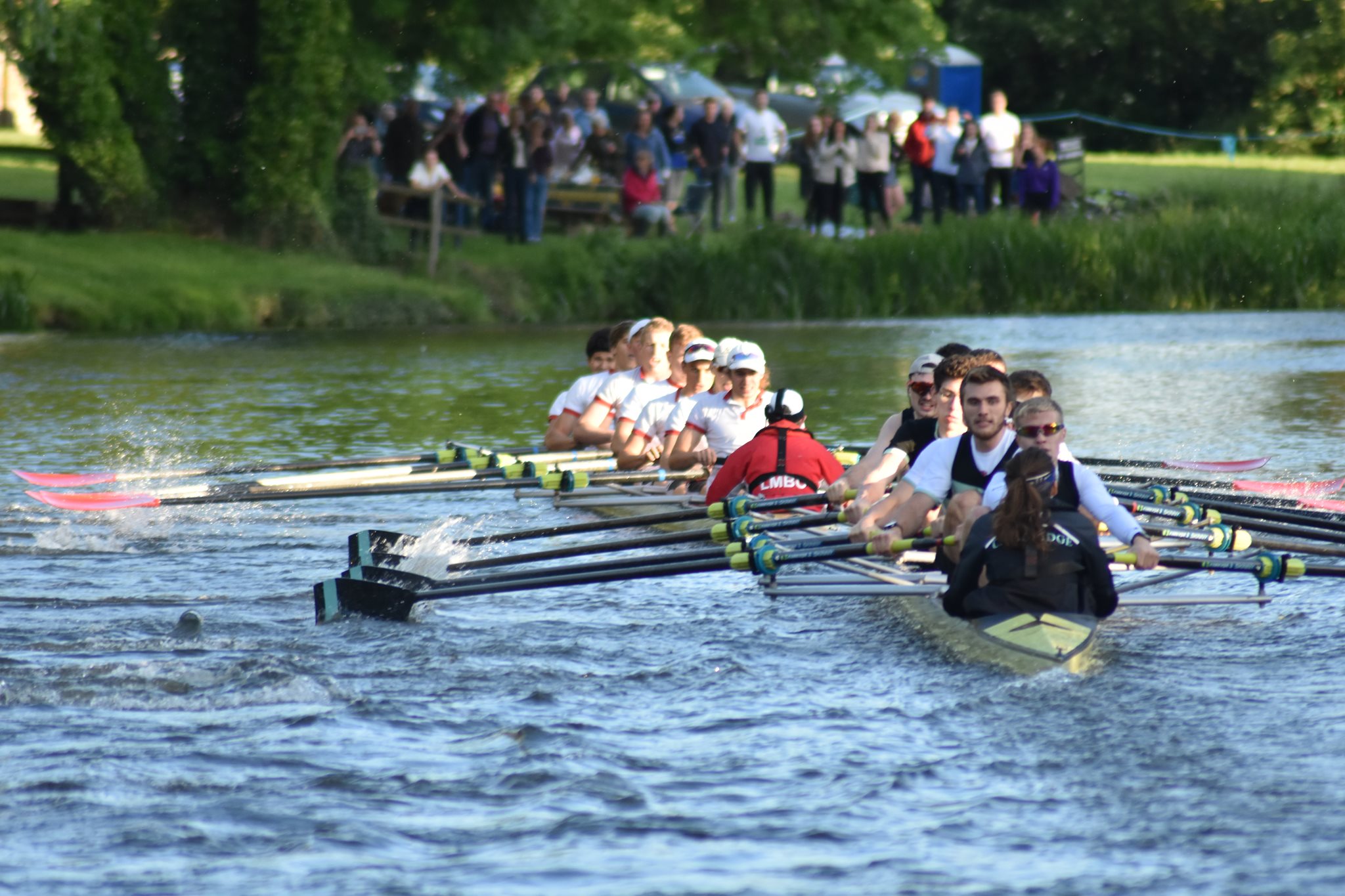 Ben Dyer, in Cambridge blue (top) and second from right (bottom), competing for Caius in the May Bumps in 2019 (credit: Giorgio Divitini)

When he first moved to Cambridge in summer 2017, Ben initially thought about bidding for the Varsity cross-country running team, but despite running a very creditable 17 minutes for 5km, a Hare and Hounds match was a reality check.

He went to the river instead, and has only looked back (in the boat) since. At 6ft 6ins, Ben was quickly incorporated into Caius’ novice programme and excelled before trialling for the University in 2018-2019.

He attributes his rise to the new Caius Boat House, the facilities and the support, and says other colleges will be battling for second place if May Bumps can take place next term.

He says: “I don’t see any college challenging us if we have everybody available. We have nine past or present triallist on the men’s side alone.  I put that down to the new Boat House and the excellent support of College.”