Wendy Fox is the welcoming and friendly face which students, and their parents, meet on their arrival at Caius.

As Accommodation Manager, it is Wendy who makes the room allocation and greets students on their first day at Caius, many embarking on independent living for the first time. She acknowledges the responsibility, but enjoys watching the transformation over their time at Cambridge.

“When the students first come they’re often really scared and apprehensive, and then they leave as confident young adults ready to face the world,” Wendy says.

“On arrivals’ day you see the parents as well. I’ve had a few mums crying, and you see them three or four years’ later, and they still remember you and it’s the other emotions then, of pride on their child’s graduation. It’s lovely.”

Wendy has plenty of interaction with students, and their parents, before their arrival in Cambridge.

On open days she can be found in the marquee in Gonville Court showcasing College accommodation and answering questions from prospective parents and students, explaining how rental periods work, how the ballot works, and students’ options throughout their years at Caius.

She knows the importance of meeting any special requirements, such as for accessibility reasons, and she has to field requests, manage expectations, provide reassurance, and stay calm.

Some of the most frequently asked questions prior to students’ arrivals in Cambridge are easily answered: “Why can’t I have a bigger room? North or south facing? How far is it from town?”

Wendy adds: “I place a lot of emphasis on getting it sorted before students arrive, so we don’t have the stress when they do arrive when there’s really no other room available.

“I also do have a lot of dealings with parents, who want to make sure their son or daughter has a good room. I just have to say ‘they’re all lovely rooms… when you get here you’ll see that… and they’ll absolutely love it’. And when they get here the parents admit that I was right!”

Fortunately at Caius, with Harvey Court and the Stephen Hawking Building on West Road, Caius has some delightful freshers’ accommodation. The outside houses in various parts of the city and accommodation in Old Courts are also desirable for continuing undergraduates and graduate students.

But when the ballot for continuing undergraduates takes place in March, the most coveted rooms offer a unique opportunity. 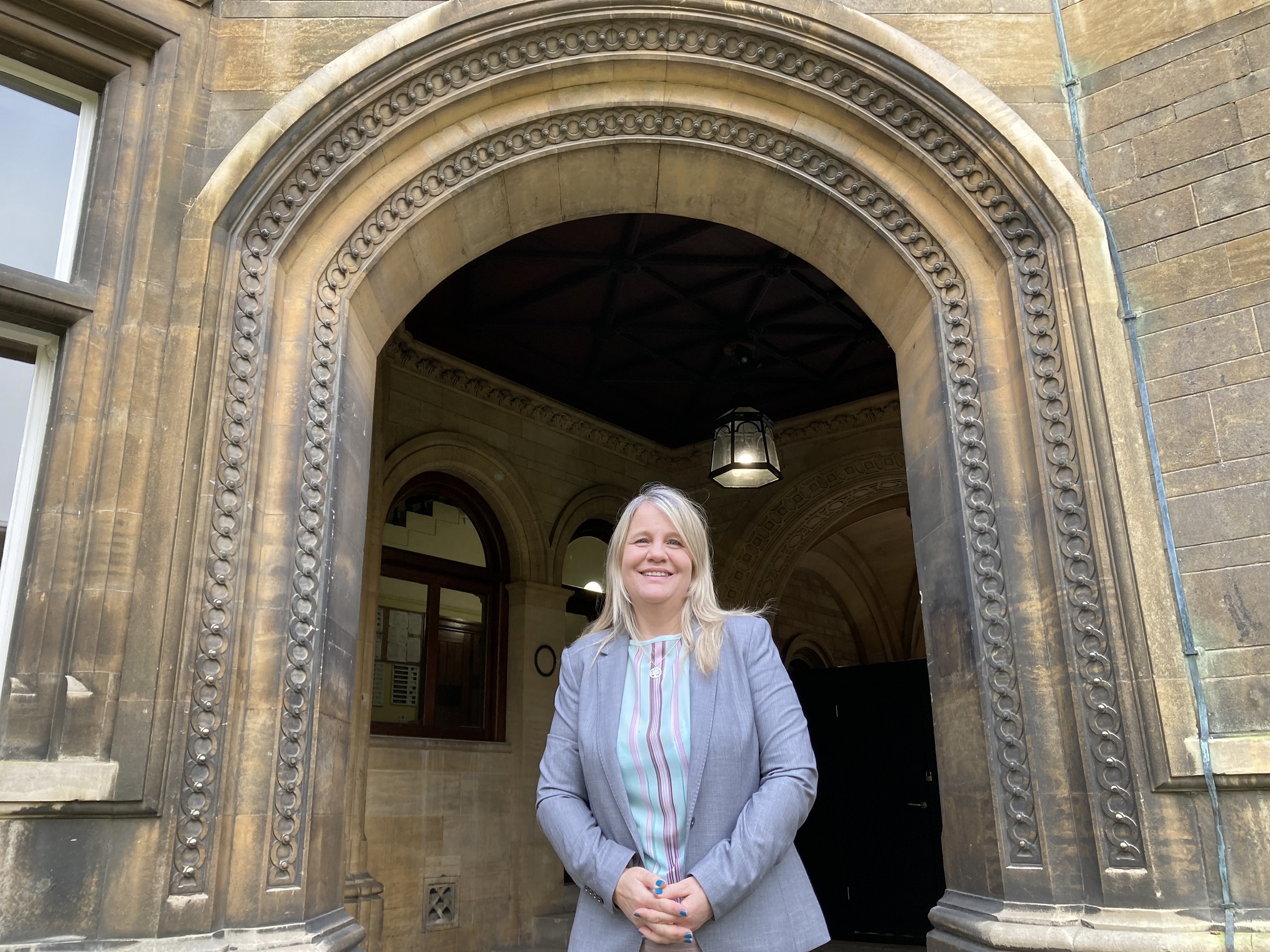 Wendy, pictured, adds: “The Tree Court rooms and O staircase seem to go first every year, especially the turret room which looks down King’s Parade. That’s a once-in-a-lifetime chance to live somewhere like that.

“But for most of the students it’s more important who they’re with rather than where they are.

“Some of the outside properties are quite popular in second year. After a year in West Road students often wish to experience a bit more independence, more like what they see their friends at other universities doing.

“Being further away, although still only five minutes’ cycle from the city centre, offers that independence.”

One of Wendy’s favourites is the graduate flats at Alice Cheng House, overlooking the River Cam by the Caius Boat House and near Jesus Green. “It’s just lovely,” she says.

Wendy celebrates 25 years at Caius in November. She joined the College initially on a part-time basis in the Tutorial Office. As a new mother, her previous role as a claims adjuster at Lloyds of London, coupled with the daily commute, was incompatible with family life.

“Here was really family friendly, a slower pace, a real sense of community and a lovely environment to work in,” adds Wendy, who has been a central figure in the community ever since.

Four years later, as Computer Records Administrator and Deputy Tutorial Administrator, she had an integral role as the College’s systems were transferred to digital databases, including with the introduction of CamSIS, the University wide student database.

In 2012 Wendy took responsibility for accommodation in the Tutorial Office, and in 2017, she moved to her own department, becoming Accommodation Manager in 2018.

The Covid-19 pandemic has presented challenges for Wendy, who has been a key figure in the management of household bubbles to mitigate infection risk and maintain social distancing. One of the biggest issues to overcome was following the A-Level results turnaround and the associated higher number of freshers.

Wendy adds: “Some wondered how we would cope, but I’ve got the attitude that there is always a solution, so it didn’t faze me. You just have to be a bit inventive and stay calm.”

It all worked out, just like being at Caius has for Wendy. Her daughters, Jessica, 26, and Annabelle, 22, are now a similar age to Caius students, while she spends her spare time supporting young people, too. Wendy is a team manager and publicity volunteer for Cambridge and Coleridge Athletic Club, and the Cambridgeshire County Women’s team.

She adds: “I really like the interaction with students and young people. I think that’s why I’ve stayed so long. They’re so vibrant and energetic and you get a buzz from them.”

Students, and their parents, can be comforted to know Wendy will put students’ best interests first, and she knows when a room is north or south facing.