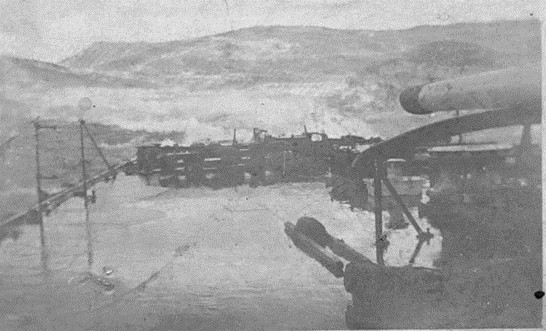 December 1914 was the only month in the whole of WW1 when Caius did not lose a single man.

Christmas is such a season of hope and expectation and one story from the Memorial leaps to mind. Robert Bulmer Sanderson (1915) is the only Caian listed there who did not die. Born in Cardiff in 1896, R B Sanderson was a 2nd Lieutenant in the Royal Garrison Artillery who then joined the Royal Flying Corps. Robert also served in WW2 in the RAF and died in 1979. At the end of the WW1 (when the lists were being drawn up) he became confused with Roy Broughton Sanderson. Both were 2nd Lieutenants in the Royal Garrison Artillery and both were Cambridge men. Robert is Caius version of the Pandora’s Box myth, our story of hope.

The men of Caius did not only serve in the army. A small number served in the Royal Navy and they must have approached Christmas 1914 with some trepidation. Winter at sea is not pleasant and this photograph was sent back home as a postcard, dated Christmas Day 1914. It was taken at sea on HMS Falmouth, a battle cruiser that went on to fight at the Battle of Jutland in 1916 and was torpedoed as she limped home to Bridlington. 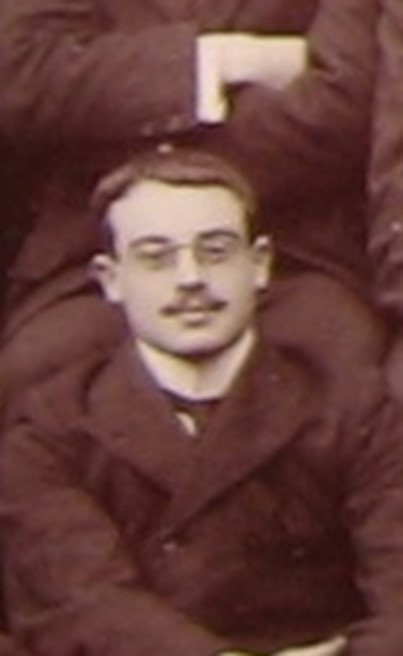 me objective of the German army early in WW1 was to ‘race to the sea’ and to reach Boulogne as quickly as possible. In this they were thwarted, losing the battles at the Marne and the Aisne. The town of Ypres (Wipers to the ordinary soldier) then stood in their way and the 1st battle of Ypres was fought in the run up to Christmas 1914. Lloyd Owen Lloyd Price went out to France, arriving just after the battle. He was rifleman R/5798 of the 2nd Battalion, the Kings Royal Rifle Corps.

Christmas Day 1914 is famous for the Christmas Truce (Weihnachtsfrieden) when the men on both sides just stopped fighting. There had been an exchange of greetings and song for several days and then the soldiers of the two warring armies celebrated the festival with games of football.

Lloyd was at a position called the Brick Stacks at Guinchy at New Year. In an attempt to retake lost positions and remove the German machine gun post there, an attack was launched on the 10th January that resulted in about 90% casualties. Lloyd was missing, presumed killed, in that action. He was 30 years old. 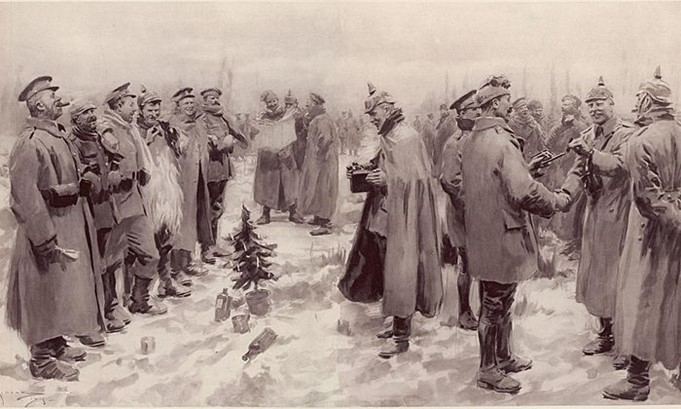 This spontaneous outbreak of seasonal spirit between the two sides on the Western Front did not please the military leaders who were worried about discipline. They were keen that it should not be repeated the following year. However, at Christmas 1915 near Aubers on the Western Front, a Captain with the 15th Royal Welsh Fusiliers (London Welsh) reported that a drunken German soldier did climb out of the trenches into no-man's land and there was a rush to barter and exchange souvenirs between the two sides.

"There had been a feverish exchange of souvenirs, a suggestion of peace all day and a football match in the afternoon, and a promise of no rifle fire at night. All this came to naught. An irate Brigadier came spluttering up to the line, thundering hard, throwing a "court martial" into every other sentence, ordering an extra dose of militant activity that night and breathing fury everywhere. We had evidently jeopardised the safety of the Allied cause." ‘Up to Mametz’, Griffith

Bertie Felsted served during the war with the Royal Welsh Fusiliers and became the oldest man in Britain when he died aged 106. He said of Christmas Eve 1915:
… shivering in their trench near the village of Laventie, [he] heard the carol Silent Night wafting over from the German lines 100 yards or so away. It wasn't long before we were singing as well. Good King Wenceslas, I think it was. You couldn't hear each other sing like that without it affecting your feelings for the other side.

The next morning, Christmas Day, there was some shouting between the trenches. 'Hello Tommy, Hello Fritz,' that sort of thing and that broke a lot more ice. As far as I can remember, a few of the Germans came out first and started walking over. I do remember a whole mass of us just getting up and going out to meet them. Nothing was planned. It was spontaneous. There was a bit of football; if you can call it that. Someone suggested it and somehow a ball was produced. I don't know were from. It wasn't a game as such - more of a kick-around and a; free- for all. There could have been 50 on each side for all I know. I played because I really liked football. I don't know how long it lasted, probably half an hour and no one was keeping score.

The truce came to an end with the appearance of an angry British major, barking out orders to return to the trenches and terse reminders that they were there to "kill the Hun not make friends with him". A British artillery salvo finally shattered the mood. Instructions had been issued that fraternization was not to take place and that there would be serious consequences if any did take place. One Commanding Officer and a Company Commander were court martialled but one was acquitted and the other reprimanded. General Haig remitted that punishment as the officer had previously distinguished himself in the field.

In 1916, there was no repetition of the Christmas Truce but there were many newspaper photographs of attempts of the soldiers at the front to celebrate Christmas.

The weather ‘over there’ was atrocious, extremely cold with a huge amount of snow. On the 13th December there was a massive avalanche in Italy near Mount Marmolada, killing a large number of Italian soldiers fighting for the Allies. It was one of several avalanches thought by some to have been triggered deliberately as a weapon. It is estimated that by the end of December between nine and ten thousand soldiers had died this way.

Conditions on the Western Front were no better and the Imperial War Museum holds several first-hand accounts of the soldiers on the front:
The coldest winter was 1916-17. The winter was so cold that I felt like crying… I didn’t actually cry but I’d never felt like it before, not even under shell fire. We were in the Ypres Salient and, in the front line, I can remember we weren’t allowed to have a brazier because it weren’t far away from the enemy and therefore we couldn’t brew up tea. But we used to have tea sent up to us, up the communication trench. Well a communication trench can be as much as three quarters of a mile long. It used to start off in a huge dixie, two men would carry it with like a stretcher. It would start off boiling hot; by the time it got to us in the front line, there was ice on the top it was so cold.

Nobody could get up to us and if they did get up to us with water it was no good because it was completely frozen stiff; our water bottles were frozen stiff. And all we’d had for about three days was to suck ice, cut your water bottles and suck the ice out of it. The River Ancre was just on our right at that time and we went down to the Ancre every night with pick-axes to try and get through to the water, but we never succeeded.

Fighting under these conditions, the next Caian to die was Ernest John Robinson Briggs Gooderham. He was one of that very small number of priests who actually fought as a soldier. He served with the Royal Irish Rifles as a machine gunner and died on the 13th December 1916. He is buried in Agny Military Cemetery close to Arras. He had been on a quiet area of the front when a German shell hit the dugout that he had only just entered.