The Dead, the Undead and the Life Eternal The Revd Canon Adrian Daffern

My wife was away last weekend, which gave me the chance to do something that she would have hated. I was able to sit, alone, in the darkness, and watch, back to back, the latest BBC adaptation of Dracula, starring the splendidly-named Claes Bang as the eponymous vampire. It was a neo-baroque mixture of horror, camp, and not a little profound reflection on the nature of life, and death, and the mysterious workings of time. There were some great one-liners: the unfortunate lawyer engaged by Count Dracula, Jonathan Harker, and becomes his victim, is accused one evening by the Count of ‘looking rather drained’. But the best lines probably belong to Sister Agatha Van Helsing, nun and vampire-hunter, who says to Dracula at their first stand-off, ‘I’m all your nightmares at once, I’m an intelligent woman with a crucifix’. I hope that the Dean will find an opportunity to use that line in the near future.

I am feeling a little undead myself this evening, to be honest. Because while there is (I think) a pulse, and I have not had any problems with crucifixes or mirrors en route, I am conscious that I am surrounded, homiletically (and with the notable exception of the Vicar of Little St Mary’s) by a great company of dead preachers. I hesitate to confess (having a Welsh-speaking spouse) that Arglwydd, arwain trwy'r anialwch aside, I am not very familiar with the work of William Williams Pantycelyn; but Lancelot Andrewes, John Henry Newman, and Austin Farrer, are all but too well known to me. I preach on the shoulders of giants.

I note, and agree very much with, your Dean’s assertion that these four are ‘stellar’, an appropriate adjective for the season of Epiphany. Throughout the ages their words shine, inspiring and influencing poetry, directing and informing theology, shaping and nourishing worship, and prayer. They are, one might say, ageless. Perhaps even timeless.

So it may appear that our first lesson is an odd fit with the timeless, as it is, on the face of it, all about time. The hymn asserts that time, like an ever-rolling stream, bears all its sons away.1 Ecclesiastes seems to suggest that the hymn is right, with its famous list of the events of human living – a time to be born, and a time to die; a time to weep, and a time to laugh; a time to keep, and a time to throw away; a time for war, and a time for peace.

One writer has described time as ‘the mercy of the world’, pointing out that ‘time does not stop for love, but it does not stop for death and grief, either’.2 Hence Auden’s famous invitation, in the face of grief, to
Stop all the clocks, cut off the telephone,
Prevent the dog from barking with a juicy bone,
Silence the pianos and with muffled drum
Bring out the coffin, let the mourners come.3

While we can stop the clocks if we choose, we cannot stop time. The Teacher, the Preacher, the Sage, however you wish to describe the author of Ecclesiastes,4 asserts that there is a time for every matter under heaven. For some, this passage is a bit of a cliché, even platitudinous,5 being read as a kind of Hebraic version of Jacques’ famous speech in As You Like It, one man in his time playing many parts, His acts being seven ages.6 Well I don’t know about cliché, but there is an intriguing connection between the two. The passage in Ecclesiastes does follow a very specific structure. The first two verses go positive, negative (time to be born/die; plant/pluck up); then the next four are negative/positive (kill/heal; break down/build up; weep/laugh; mourn/dance). The next four go positive/negative (throw away stones/gather up stones; em-brace/don’t embrace; seek/lose; keep/discard). Then one each of positive/negative – negative/positive to end (tear/sew; silence/speak; love/hate; war/peace). So what? Well, one commentator suggests that this demonstrates that even though our human affairs, the ‘every matters’ of the first verse, seesaw back and forth, God maintains order throughout – seven groups of four, the number of completion and the number of the cardinal points of heaven, human time in the context of cosmic order.7 Seven pairs, seven acts, seven ages. I quite like these connections, and there’s some-thing to be enjoyed in them, whether you buy into the final analysis or not.

But what counts for you and me in all of this, I think, is a simpler truth than complex numerical schemes. It is to do with our whole lives, each human life, being caught up in God. On one level it is opaque; on another, it is simply telling the truth. And that truth is found in scripture, for our consideration, our reflection, our praying. For everything - everything - there is a time. But again, so what? How does knowing any of that help? How does knowing that help if you are trying to fight a bushfire in Australia? Or you are going to attempt to sleep tonight freezing in a Cambridge doorway? If you’re dying, or divorcing, or just finding that every matter under heaven is just a bit too much? Perhaps our second reading will help. It is rooted in resurrection. It’s opening – which I can never hear without the music of Samuel Sebastian Wesley playing in the background – Blessed be the God and Father of our Lord Jesus Christ! Which, according to his abundant mercy hath begotten us again unto a lively hope by the resurrection of Jesus Christ from the dead, to an inheritance uncorruptible and undefiled, that fadeth not away, preserved in heaven for you.8 Not under heaven, but in heaven. Held fast, despite the undoubted trials and tests that the terrors of this life throw at us. Our dead preachers, in their different ways, knew the meaning of this: whether that be the ‘reverend shadow’9 that was the in-tense, introverted Lancelot Andrewes, or the great spiritual double agent that was Austin Farrer,10 they knew. They knew that at the heart of resurrection faith is not a way out, but a way in; not a panacea, but a promise.
They knew that the story of Jesus is one which makes sense of life. It’s not a stiff drink to bring momentary relief, or a drug to make reality briefly bearable. It is a story which takes pain, death, bitterness, frustration and grief, and nails it all to a cross, buries it inside a borrowed tomb, and bursts into new life because of the power of love.

That may be hard for you to swallow. I can’t blame you – it requires real faith. It always has. When, just before Christmas, I led the funeral of Jack Merritt, who was murdered in the London Bridge terror attack, I did so in floods of tears, and by clinging on, just - just - to the promise found in that second lesson we just heard:
Although you have not seen him, you love him; and even though you do not see him now, you believe in him and rejoice with an indescribable and glorious joy.11

For everything there is a season. A season for dead preachers, for time-travelling and clock-stopping, for tears, and, through more tears, joy, and hope. Best of all, for you, and for me, it is always the season of resurrection. A time to mourn – and then, with the dawn, a time to dance.
AMEN.

Returning to Caius as a postgraduate student 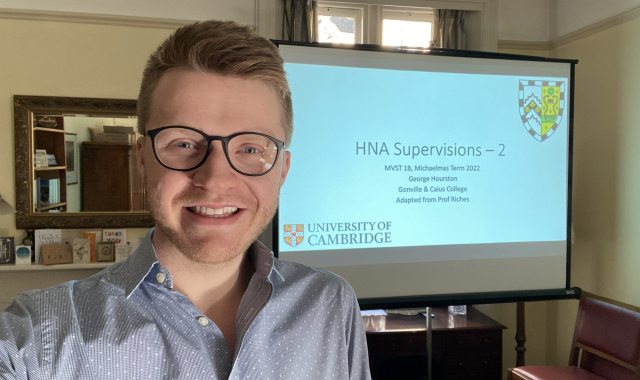 George Hourston (Medicine 2012) has had a busy autumn. He began an Orthopaedic Registrar job in Peterborough, got married to his long-time...

Find out moreReturning to Caius as a postgraduate student 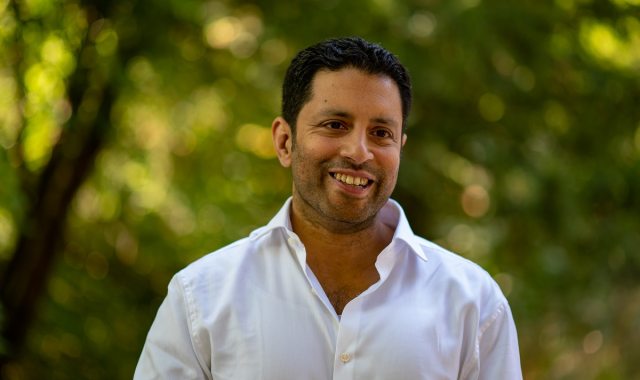