Classics at Cambridge isn't just studied as a period in the past, but looks at how classical culture, language and philosophy have affected the history of Western civilisation right up to the present day.

Studying the civilisations of ancient Greece and Rome is not only of fundamental importance in its own right but also essential for a critical engagement with our own culture. Cambridge is a major centre for the study of the Classical world, a tradition which has a long history at Caius. John Caius, our second founder, was a notable classical scholar as well as a celebrated physician. He lectured on Aristotle at Padua University after taking his doctorate there in 1541. His remarkable building plan for the College, with its three gates of Humility, Virtue and Honour, which are intended to portray stages in the intellectual journey leading to a degree, reflects the strength of his classical interests. Outstanding classicists educated here since Dr. Caius’ day include the sixteenth–century scholar Jan Gruter, the archaeologist Sir William Ridgeway, and David Shackleton Bailey, editor of Cicero, Horace and Martial.

There are two courses available:

The three-year course is usually for students with A Level/IB Higher Level Latin (regardless of whether they have Greek). We offer an intensive Greek programme for those with little or no Greek.
The four-year course is for those with little or no Latin, and offers a preliminary year which focuses on Latin language and Roman culture. Years 2, 3 and 4 are identical to the three years of the three-year degree.

If you have A Level/IB Higher Level Greek but not Latin, you may be advised to take the four-year degree (depending on circumstances – please contact the College admissions office for guidance).

The teaching pattern consists of language and essay work which are College-based, together with lectures organised by the Faculty. For Part I, there are normally two hours of College teaching per week, with one language session and one essay. Students are usually taught singly or in pairs. Students with reasonably strong languages are encouraged to try composition, translation from English into Latin or Greek, but this remains entirely optional.

For Part II there is roughly one essay session per week, but no language work. Students in Part II have a wide and stimulating field of choice covering all aspects of classical culture. In Classics Part II it is possible to include one paper from another Tripos.

Caius normally has about ten Classics undergraduates, together with one or more postgraduates, forming a friendly and welcoming group within the wider community of Caius. The Director of Studies is Dr Alessandro Launaro, who is a University Senior Lecturer in Classics (Classical Archaeology) with a long-standing involvement in archaeological fieldwork in Italy: his research focuses on aspects of the social-economic history of the Roman world as seen through the development of urban and rural landscapes.

Dr Richard Duncan–Jones is an ancient historian whose work on the Roman Empire is well known. Professor Annabel Brett is a university senior lecturer in political thought and intellectual history, teaching classical philosophy and the history of political thought from Plato to the Renaissance. The Dean of Chapel, Rev Dr Cally Hammond, has published a translation of Augustine's Confessions for the Loeb Classical Library, and she also contributes to Classics teaching.

The College Library has a large and well–stocked Classics section. Caius has one of the largest surviving medieval collections of any College, which includes important manuscript versions of classical authors.

Our aim at Caius is to attract students who are excited about the Classical world, whether their primary interest is in literature, history, philosophy, archaeology, or in language. If you are considering applying and would like to discuss the options further please contact the Caius Admissions Office on admissions@cai.cam.ac.uk.

The College welcomes applications from strong candidates for both the four- and three-year courses.

Before the interview, applicants are asked to send one sample of written work that has been done at school. This provides the interviewers with useful information, and may offer a starting point for discussion. The main interview is normally with two Fellows in the subject.

All candidates are also required to take a written assessment at interview. This consists of a translation exercise (60 minutes) for the three-year course or a Language (or GCSE Latin) assessment after teaching session (60 minutes) for the four-year course. More information can be found here. Please note that your performance in the assessment at interview will not be considered in isolation, but will be taken into account alongside the other elements of your application.

Links that are worth pursuing are the Classics Faculty website and the Fitzwilliam Museum website, especially the Antiquities and the Coins and Medals pages. 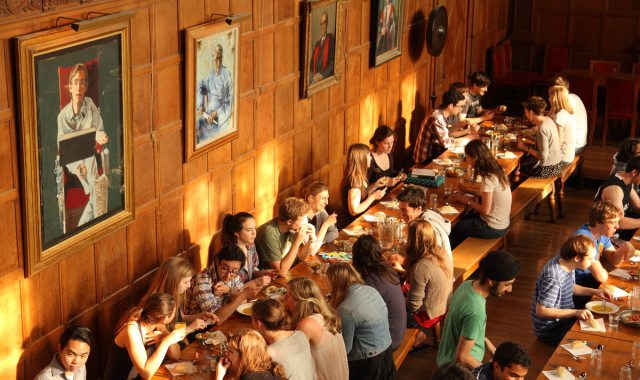