The methods used by Professor Gallagher and colleagues in the study, published in the journal Cancer Research, can help to determine the properties of the tumour based on its metabolism and can classify how aggressive the cancer is. Hyperpolarised carbon-13 magnetic resonance imaging (MRI) is an emerging tool for probing tissue metabolism by measuring the metabolism of a breakdown product of glucose – termed pyruvate. The pyruvate is labelled with carbon-13, which is non-radioactive and present naturally in the human body at concentrations of about 1%, and importantly can be detected with MRI unlike the more abundant carbon-12. The hyperpolarisation technique increases the carbon-13 signal that is detected by four orders of magnitude and is undertaken in extreme physical conditions: close to absolute zero in a strong magnetic field while undergoing microwave irradiation. When hyperpolarised, this pyruvate is warmed rapidly, injected into the patient, and circulates to the tumour, where it is enzymatically exchanged into lactate in the cell. The build-up of lactate, commonly known as lactic acid, in muscle after exercise is responsible for muscular pain, and nearly a century ago it was discovered that tumours produce large amounts of lactate in even in the presence of abundant oxygen, and this change in metabolism is a key hallmark of cancer. The new MRI technique allows the exchange between pyruvate and lactate to be imaged in real time within the human body when the patient is in the scanner and the amount of lactate acts as a signature of the tumour. 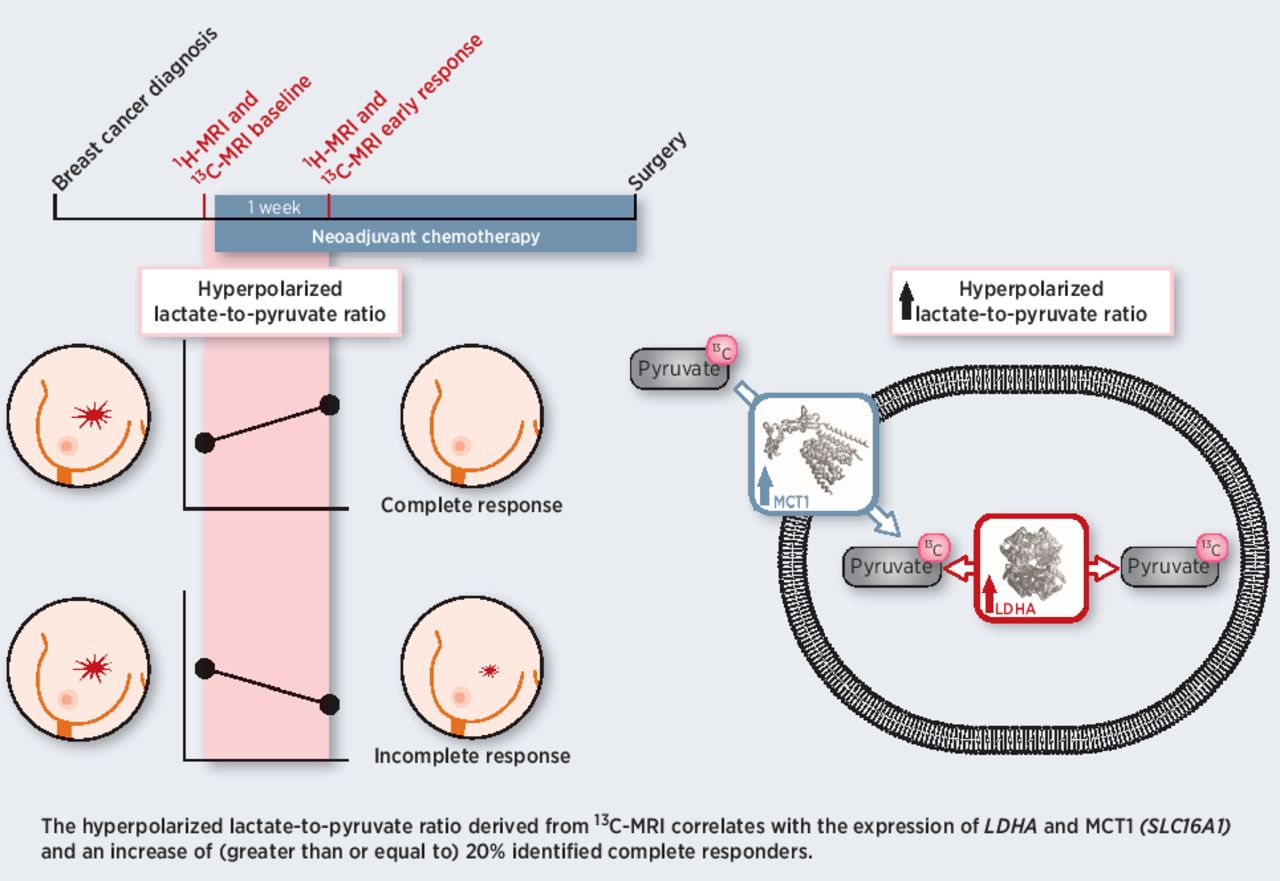 A graphical abstract of the research (credit: Cancer Research)

Conventionally in radiology, the change in the size of a tumour is monitored over weeks or months to determine if the patient is responding to therapy, potentially missing the opportunity to intervene earlier with more effective therapy. Studies such as this look at earlier and potentially more sensitive responses to treatment, such as the physiology of the tumour, its metabolism, and molecular markers on or within the cell, therefore expediting treatment.

Professor Gallagher, lead of the Clinical Molecular Imaging Group in the University of Cambridge’s Department of Radiology at Addenbrooke’s Hospital, says: “We imaged breast cancer in women who are awaiting surgery, and in that interim period they have neoadjuvant (or pre-surgery) chemotherapy to shrink the tumour. Women who respond well to this treatment are more likely to have breast-conserving surgery and a better long-term outcome.

“We monitor this response very early, after just a few days of treatment, and although we have undertaken this in a very small number of patients to date, this work suggests that we can differentiate those who respond to treatment from those who don’t before other more conventional imaging measures of successful response can detect this.

“Using this technique, we can also classify patients into how aggressive the tumour is: knowing which of those cancers are more or less aggressive is important for determining appropriate treatment. Women with more aggressive tumours are more likely to have neoadjuvant treatment allowing the tumour to get smaller before surgery. In those patients where the tumour disappears prior to surgery, they do better at surgery and have a very good outcome.”

He adds: “This is early days for this technology. We’ve got a small number of patients and we’re only discovering where this method could be applied.

“We have to much more research before we can say this will significantly impact patient care. But the cutting-edge tools we are working are getting closer to clinical application. We need to undertake larger studies with more patients. We’re looking at collaborating with other groups in the UK, Europe, and more widely.”

The study is an extension of the research work Professor Gallagher, pictured below, first began as a PhD student at Caius in 2006. He was also an undergraduate at Caius and went to Oxford for his clinical studies before returning to Cambridge for his radiological training and PhD. He later became a Caius Research Fellow and is now a College Lecturer and Fellow. He was appointed as Professor of Translational Imaging in 2020. 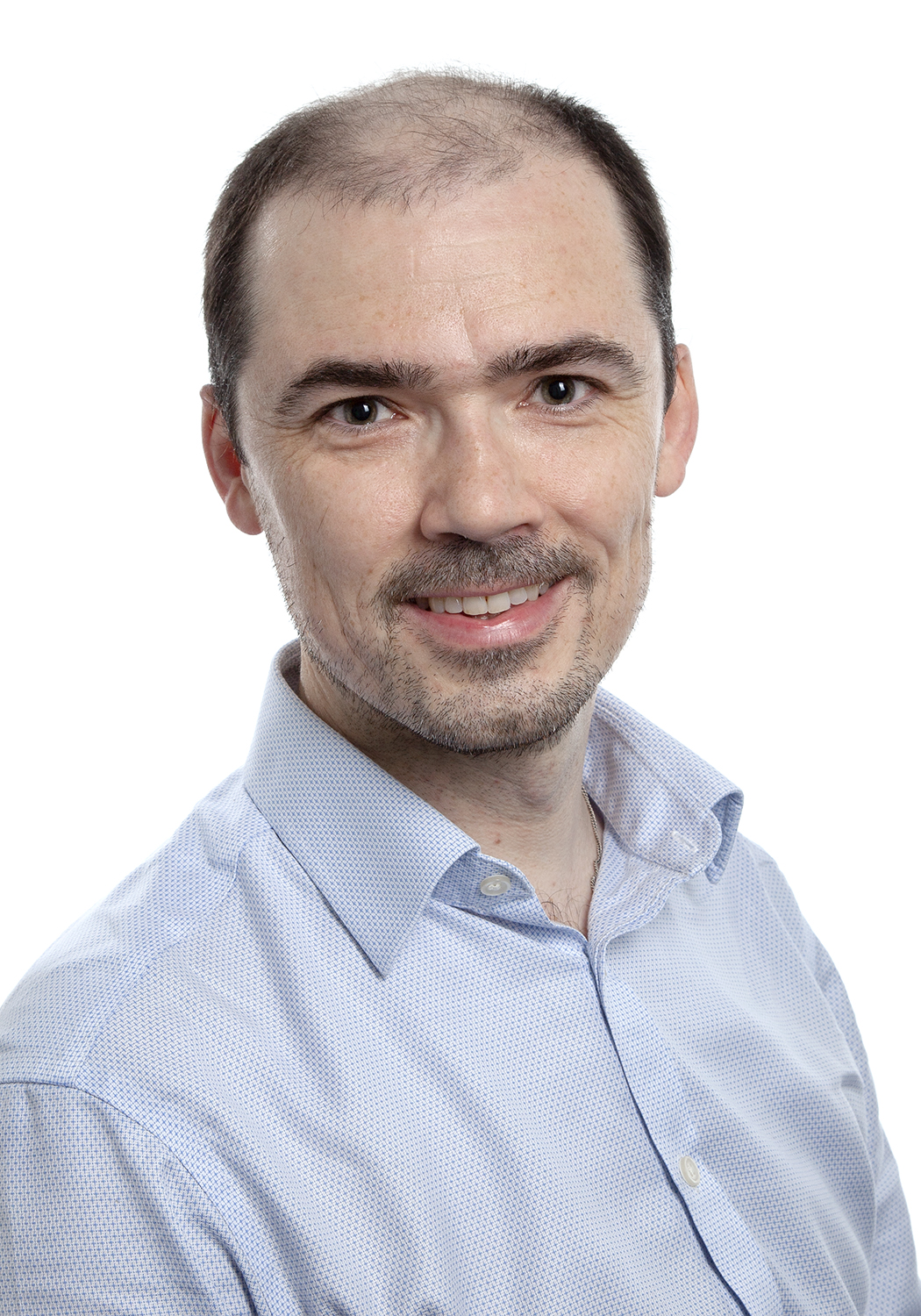 “I am fascinated with how technology can be applied to look at the human body in new ways,” he adds.

“When I did my PhD in Cambridge it was about using a new type of MRI to look at metabolism within cells and animals and it took a decade to translate this into humans. In 2016 we undertook the first study in Europe with this technique.”

“Caius has had a huge influence on my professional career. I very grateful to the many people who have taught and mentored me in College, and I owe a huge debt to them,” Professor Gallagher says.

Read about the research in The Sunday Times (£)